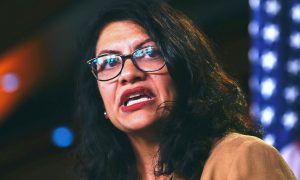 Less than two weeks ago, following the tragic police shooting of a fleeing Minnesota man named Duante Wright, Michigan Congresswoman Rashida Tlaib drew nation-wide headlines by calling for the total abolition of police. “Duante Wright was met with aggression and violence,” Tlaib tweeted accurately enough – before going on to refer to his death as a “government funded murder” and call for “no more policing, incarceration, and militarization” in the United States.

For good measure, the sitting Representative said that the accidental shooting of Wright—who was killed by an officer who very clearly mistook her gun for a non-lethal weapon—“wasn’t an accident.” She went on to add the opinion that American policing is “inherently and intentionally racist.”

While bizarre, Tlaib’s comments were hardly unique within the current political moment. Just a few days later (04/17/2021), Representative Maxine Waters (D-Calif.) flew into Brooklyn Center, Minnesota, where Mr. Wright was shot, and all but openly called for riots. Surrounded by a tense and angry group of (mostly peaceful) protesters and speaking hours after the city’s official curfew, Waters demanded a specific verdict in the then-ongoing Derek Chauvin criminal case: “Guilty, guilty, guilty.”

When explicitly asked what protesters should do should the jury acquit, Waters encouraged young activists to “stay in the streets,” “fight for justice,” get “more confrontational,” and “let them know we mean business.”

Honesty compels me to note that this sort of nonsense is far from unknown on the political right. Former President Donald Trump engaged in a great deal of loose talk following the 2020 election, including not merely legitimate criticisms of media bias but also accusations that Democratic opponent Joe Biden stole the race, and a brief but real flirtation with attorney Sidney Powell’s “kraken releasing” claims about Dominion Voting Machines being involved in a complex plot begun under late Venezuelan strongman Hugo Chavez.

Mr. Trump eventually found himself impeached for a second time, his political opponents citing a speech that included phrases like “fight like Hell” as evidence he had a role in inciting the Jan. 6 breach of the Capitol.

All of this is bad. Leaving aside the obvious point that it is boorish and uncouth for elected political leaders to provoke brawls and street-fights, the macro-level effect of such talk is enhancement of the climate of anger and suspicion that currently defines mainstream American discourse—and doing that has empirically measurable real-world consequences.

A number of well-done recent studies have come to the hard-to-duck conclusion that Americans are far more fearful of and angry about a whole range of phenomena than we logically should be. This is almost certainly due to the political and media climate of today, and it has real and unfortunate effects on human behavior.

In February of 2021, the heterodox but well-regarded Skeptic Research center conducted a “large-N” survey of Americans to see how many people citizens believe are shot and killed annually by the police.

During this same year, an entirely different study from the Manhattan Institute found that eight of ten Black survey respondents and six of ten educated white liberals believe that young Black men are more likely to be shot dead by police than to die in automobile wrecks.

In reality, of course, the total number of unarmed Black people—of both sexes—fatally shot by police last year was 18. In contrast, 40,000-50,000 Americans die in car wrecks every year, with Blacks represented among them about proportionately.

Such discourse-driven nonsense beliefs even influence the dead-serious conversations we are and need to be having about the COVID-19 pandemic. As the comedian Bill Maher pointed out in a darkly hilarious monologue, more than 40 percent of registered Democrats believe that a typical individual’s chances of being hospitalized if infected with SARS-COV-2 are 50 percent or more, while another 28 percent put the same chance at 20-49 percent.

In reality, as Real Clear Politics noted in a piece on Maher’s speech, the real figure is between one and five percent—and it is generally closer to the lower end of that range. Order-of-magnitude mistakes like this obviously affect individual and group behavior: just ask any school-age children sitting around your house today while “virtually learning!”

In the context of what Tlaib and Waters were discussing, serious issues of policing and crime, radical or off-base statements are even more useless and dangerous than they might be elsewhere.

While “defunding the police” might sound like edgy fun to suburban and tenured radicals, one of the more robust findings in social science is that reducing effective policing within an area correlates highly with increasing crime. Major essays and indeed entire books have been devoted to this topic by Thomas Sowell, Mona Charen, and Heather MacDonald among many others—as was much of a chapter of “Freakonomics,” far from the political right.

The empirical evidence is clear. Between 1963 and 1993, driven largely by post-Miranda changes in policing during the social revolution of “The Sixties,” murders soared from 8,640 to 24,530 while rapes increased roughly five-fold.

Crime plunged sharply during the late-1990s era of tough Broken Windows Policing, but murders AGAIN rose by more than 3,000—from 14,164 to 17,294—during the “Ferguson Effect” period following the first wave of Black Lives Matter protests and riots. And, last year, they spiked again.

Data contained within a serious 20-page report from the Commission on COVID-19 and Criminal Justice strongly indicates that the cause of this was the chaos following the death of George Floyd and resulting police pull-back, with the report stating that murders “rose significantly beginning in late May and June of 2020.” Mr. Floyd died May 25, 2020.

These are dangerous times, and interesting ones in the historical Chinese sense. And, for leaders on all sides—although perhaps particularly on the political left—this would be a GREAT time to behave as leaders should. Keep calm, carry on, tell others to do the same, and try to avoid intentionally panicking or inciting your fellow citizens.

Wilfred Reilly is an associate professor of Political Science at Kentucky State University, whose research focuses on empirical testing of political claims. He is the author most recently of “Taboo: Ten Facts You Can’t Talk About.”

Why Is Alibaba ‘Full of Gratitude’ for Record $2.8 Billion Fine Imposed by Beijing?

Commentary China’s Alibaba Group found itself under the spotlight following a record antitrust fine slapped on the tech giant, yet it openly expressed its gratitude to the Chinese regime. On April 10, the world’s biggest […]

The Arizona Democratic Party filed a lawsuit on Thursday afternoon seeking to stop the state’s Senate from carrying out an audit of the 2020 election results in Maricopa County. The complaint (pdf), filed in Maricopa County […]