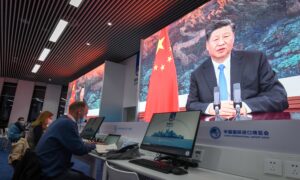 Chinese leader Xi Jinping personally directed the communist regime to focus its efforts to control the global internet, displacing the influential role of the United States, according to internal government documents recently obtained by The Epoch Times.

In a January 2017 speech, Xi said the “power to control the internet” had become the “new focal point of [China’s] national strategic contest,” and singled out the United States as a “rival force” standing in the way of the regime’s ambitions.

The ultimate goal was for the Chinese Communist Party (CCP) to control all content on the global internet, so the regime could wield what Xi described as “discourse power” over communications and discussions on the world stage.

Xi articulated a vision of “using technology to rule the internet” to achieve total control over every part of the online ecosystem—over applications, content, quality, capital, and manpower.

His remarks were made at the fourth leadership meeting of the regime’s top internet regulator, the Central Cyberspace Affairs Commission, in Beijing on Jan. 4, 2017, and detailed in internal documents issued by the Liaoning Provincial Government in China’s southeast.

The statements confirm efforts made by Beijing in the past few years to promote its own authoritarian version of the internet as a model for the world.

In another speech given in April 2016, detailed in an internal document by the Anshan City Government in Liaoning Province, Xi confidently proclaimed that in the “struggle” to control the internet, the CCP has transformed from playing “passive defense” to playing both “attack and defense” at the same time.

Having successfully built the world’s most sprawling and sophisticated online censorship and surveillance apparatus, known as the Great Firewall, the CCP under Xi is turning outwards, championing a Chinese internet whose values run counter to the open model advocated by the West. Rather than prioritizing the free flow of information, the CCP’s system centers on giving the state the ability to censor, spy on, and control internet data.

The Chinese leader acknowledged the regime lagged behind its rival the United States—the dominant player in this field—in key areas such as technology, investments, and talent.

To realize its ambitions, Xi emphasized the need to “manage internet relations with the United States,” while “making preparations for fighting a hard war” with the country in this area.

American companies should be used by the regime to reach its goal, Xi said, without elaborating on how this would be done.

He also directed the regime to increase its cooperation with Europe, developing countries, and member states of Beijing’s “Belt and Road Initiative,” to form a “strategic counterbalance” against the United States.

The Belt and Road Initiative (BRI) is a massive infrastructure investment project launched by Beijing to connect Europe, Asia, Africa, and the Middle East through a network of rail, sea, and road linkages. The plan has been criticized by the United States and other Western countries as a conduit for Beijing to increase its political and commercial interests in member states while saddling developing countries with heavy debt burdens.

The BRI has also pushed countries to sign up to “digital silk road” projects—those involving information and communications technology infrastructure. At least 16 countries have signed memoranda of understanding with the regime to work in this area.

Xi ordered the regime to focus on three “critical” areas in its pursuit of controlling the global internet.

First, Beijing needs to be able to “set the rules” governing the international system. Second, it should install CCP surrogates in important positions in global internet organizations. Third, the regime should gain control over the infrastructure that underlies the internet, such as root servers, Xi said.

Domain Name System (DNS) root servers are key to internet communications around the world. It directs users to websites they intend to visit. There are more than 1,300 root servers in the world, about 20 of which are located in China while the United States has about 10 times that, according to the website root-servers.org.

If the Chinese regime were to gain control over more root servers, they could then redirect traffic to wherever they want, Gary Miliefsky, cybersecurity expert and publisher of Cyber Defense Magazine, told The Epoch Times. For example, if a user wants to go to a news article about a topic deemed sensitive by Beijing, then the regime’s DNS server could route the user to a fake page saying the article is no longer online.

“The minute you control the root, you can spoof or fake anything,” he said. “You can control what people see, what people don’t see.”

In recent years, the regime has made headway in advancing Xi’s strategy.

In 2019, Chinese telecom giant Huawei first proposed the idea for an entirely new internet, called New IP (internet protocol), to replace the half-century-old infrastructure underpinning the web. New IP is touted to be faster, more efficient, flexible, and secure than the current internet, and will be built by the Chinese.

While New IP may indeed bring about an improved global network, Miliefsky said, “the price for that is freedom.”

The proposal was made at a September 2019 meeting held at the International Telecommunications Union (ITU), a U.N. agency responsible for setting standards for computing and communications issues that is currently headed by Chinese national Zhao Houlin. New IP is set to be formally debated at the ITU World Telecommunication Standardization Assembly to be held in March 2022.

Miliefsky said the plan is unlikely to gain widespread support among countries, but may be adopted by like-minded authoritarian states such as North Korea, and later by countries that signed onto BRI and are struggling to repay its loans to China.

This would accelerate a bifurcation of the internet, what analysts such as former Google CEO Eric Schmidt have dubbed the “splinternet,” Miliefsky said. “The communist net and the rest of the world.”

The Epoch Times has reached out to Huawei for comment.

According to the document, Xi ordered the CCP regime to set up “three ecosystems”—technology, industry, and policy—to develop core internet technologies.

Having skilled workers was key to this plan, with Xi directing that talent should be hired from around the globe. This would be done through Chinese companies, Xi prescribed.

He told Chinese firms to “proactively” invite foreign “high-end talents,” and to set up research centers overseas and hire leading ethnic Chinese and foreign specialists to work for them.

Meanwhile, Xi asked the regime to set up a professional training system in China, which can systematically develop a highly skilled workforce in the long run.

He also directed officials in each level of government to guide Chinese companies to develop their business plans to align with the regime’s strategic goals, and encourage capable enterprises to take the lead in developing innovations in core technologies.

Enterprises were to be educated in having “national awareness and safeguarding national interests,” Xi said. Only then should the regime support and encourage their expansion.

Because talent and critical technology are concentrated overseas, the Chinese leader also ordered authorities to support the development of a group of multinational internet companies that can have global influence.

Xi, in his 2016 speech, described all online content as falling into three categories: “red zone, black zone, and gray zone.”

“We must consolidate and expand the red zone and expand its influence in society,” Xi said in a leaked speech in August 2013. “We must bravely enter into the black zone [and fight hard] to gradually get it to change its color. We must launch large-scale actions targeting the gray zone to accelerate its conversion to the red zone and prevent it from turning into the black zone.”

Inside China, the CCP has a stranglehold on online content and discussion through the Great Firewall, a massive internet censorship apparatus that blockades foreign websites and censors content deemed unacceptable to the party. It also hires a massive online troll army, dubbed the “50-cent army,” to manipulate online discussion. A recent report found that the CCP engages 2 million paid internet commentators and draws on a network of 20 million part-time volunteers to carry out online trolling.

Freedom House, in its 2020 annual internet freedom report, labeled China as the world’s worst abuser of online freedom for the sixth straight year. Chinese citizens have been arrested for using software to circumvent the Great Firewall and punished for posting comments online unfavorable to the Chinese regime. In a now-notorious incident during the early stages of the pandemic, whistleblower doctor Li Wenliang was reprimanded by police for “rumor-mongering” after warning colleagues in a social media chat group about a SARS-like virus in Wuhan City.

In the 2017 remarks, Xi told the regime to develop a larger group of “red” online influencers to shape users’ perceptions of the CCP. He also called for an expansion of the 50 cent army to operate both inside and outside of China’s internet.

Since the pandemic, the CCP has sharply escalated its efforts to influence online opinion overseas. Using large networks of troll accounts on Twitter and Facebook, the regime has been able to propagate and amplify propaganda and disinformation on topics such as the pandemic, racial tensions in the United States, and the regime’s oppression of Uyghur Muslims in Xinjiang.

New Hampshire has no right to challenge Massachusetts’ allegedly unconstitutional pandemic-era policy of taxing out-of-state residents who work in their home state for employers located in Massachusetts, the Biden administration told the Supreme Court. Billions […]

Los Angeles Police Department (LAPD) commissioners unanimously passed an initiative May 25 that aims to better support women in the police force. “The goal of the 30×30 initiative is to increase the representation of women in policing recruit classes by […]