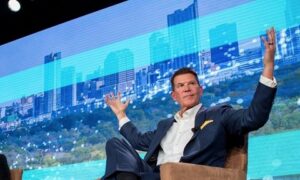 “Speed now is the number one currency in business today and you need that momentum for that digital transformation…And the big, they no longer eat the small. The quick eat the slow.”


So said former Under Secretary of State, Keith Krach, as he addressed the need for 5G technology. This emerging technology is not only 10 times faster, with the possibility of up to 100 times faster in the future, it also increases bandwidth, allowing for more connected devices at a time. No more spotty service in busy areas. An immediate connection on calls and texts. A faster and easier connection to Cloud platforms like Amazon Web Services (AWS) and Microsoft Azure.

It is clear why 5G is so desirable and why companies around the world are scrambling to produce the equipment needed to operate it. But with speed comes risk, and in this case, the risk comes from technology giant Huawei and the Chinese Communist Party.

According to Huawei’s own data, they currently have contracts with 91 countries for 5G technology. 47 of those are located in Europe, and most of them are allies of the United States. It is well understood that Huawei is deep in the pocket of the CCP and that their international reach and resources are far ahead of virtually all telecommunications corporations. It is known the world over that it is dangerous to do business with them. But when a telecommunications giant grows this large, can it be stopped?

Keith Krach believed so and set out to do just that. Undeterred by the failing system he inherited, a system where the only strategy was warning companies and other countries to stop working with Huawei, he believed that a better strategy would lead to a better result:

“We must have had more than 60 bilateral meetings with my foreign counterparts: economic ministers, foreign ministers, finance ministers. It just seemed like most countries were terrified of China. Nobody even wanted to use the words ‘China’ or ‘Huawei.’  The big ah-ha came when I asked about their relationship with China. They’d say, ‘well they are an important trading partner, but’… then they would look both ways and lean in and softly say… ‘but we don’t trust them’.”

Trust, he decided, should be the cornerstone of the U.S. national strategy on China’s 5G surge. And it is that strategy, combined with the later international shortage of semiconductor chips needed for their products, that ultimately halted the momentum of Huawei.

Most of our connected devices, from smartphones and car computers to medical equipment and personal appliances, make use of semiconductor chips, chips that are now in short supply. Apple alone spends $58 billion annually for its supply of chips and had to delay the release of its iPhone 12 for two months due to the shortage. Perhaps the hardest hit has been automobile manufacturers who, because they purchase far fewer chips than the technology giants, are low on the list to receive the chips. Ford has had to cancel shifts at two of its plants and said they face a $25 billion dollar loss this year due to the chip shortage.

Krach knows the cost of that kind of decline. Memories of the lean times for his father’s mechanics shop, when a downturn for automotive companies meant that theirs “just went absolutely flat. I remember for a year, it was just my dad and me, we were the only employees and to watch how tough that was but also to watch his resilience in terms of that” helped him make sense of the importance of industry in strengthening America as a country.

Krach’s journey from his father’s machine shop where he learned resiliency during tough economic times and the importance of fairness in competition, to his role at GM and his discovery that failure is the best teacher, and finally to his role as Under Secretary of State and his mission “to develop and operationalize a global economic security strategy to drive economic growth, combat economic aggression and maximize national security” each informed his development of what the press came to call his 5G Trifecta strategy, a strategy brought about as he set his eyes on 5G technology and China’s involvement in it. The natural next step was to look at industry leader Huawei and determine their route to success, the risks in allowing that success to continue unchallenged, and vulnerabilities that could be exploited to decrease their international influence.

Huawei’s success came from early contracts with the Chinese army and millions in state financial backing followed by the integration of their equipment and services into the nearly 800 smart cities in China. It was strengthened through more covert methods like forced technology transfers and technology theft, including the well-documented case involving theft of router software from Cisco.

The covert moved into the realm of sinister in the minds of Washington officials who feared that Beijing, through Huawei, could control and even deny the United States and its allies access to the 5G networks that make global commerce and the projection of military power possible. He saw that China needed semiconductor chips to run their 5G networks and that, while they do have Chinese companies capable of producing those chips, they were not able to produce the quantities needed for Huawei to truly dominate. Krach knew a loss of supply would mean disaster for Huawei’s smartphone industry and, following the Trump administration’s order requiring any company using U.S. machinery in the production of those chips to halt distribution of them to China, Huawei dropped from the top spot in the smartphone sector and took a substantial revenue hit.

Pressure on Huawei through cutting off supply was just one part of Krach’s strategy.  Relying on companies using American equipment to end their business dealings with China is a short-term strategy. Long-term, Krach knew that having an established and successful 5G manufacturing industry in America would be needed for there to be a more lasting impact on the growth of American 5G networks and a continued halt to China’s.

The results of those efforts are stunning. First, Krach and his team convinced Taiwanese chip giant TSMC to construct its $12 billion 5-nanometer semiconductor manufacturing plant in Phoenix, Arizona, the biggest onshoring in United States history and one that will bring with it 1,600 high-tech jobs. They have now committed to bringing six such facilities to the U.S.

Following that, Krach’s team worked with Congress to “put some serious funding into bringing our semiconductor manufacturing back to the U.S.” Their bipartisan efforts with Senator Corn and Senator Warner led to a unanimous house vote and a 96 to 4 Senate vote to approve $30 billion dollars in funding.

Krach believed that these two wins would lead to more onshoring of semiconductor companies, and his hunch was right. Samsung is expected to build a larger facility than TSMC’s, and the rest of the international semiconductor chip industry has shown interest in moving facilities to America as well. Many proposals to do so are already in the hands of those in Washington. American semiconductor chip producers are expanding, too, as Intel commits $20 billion to produce two new facilities in Arizona.

5G, according to Krach, will be the most important industry to U.S. national security, and it will take a continued effort by the leadership in Washington to build on the momentum gained through the efforts of Krach and his team and to protect American interests. By continuing the 5G Trifecta strategy brought about by Krach, the United States can further limit Huawei’s influence in the industry while strengthening America’s industrial ties to 5G technology.

For the full story on the inherent risks of Huawei dominating 5G technology, Keith Krach’s trust strategy used to successfully slow their momentum, and the emergence of America as a central figure in 5G manufacturing, watch The American Dream Takes on China Inc: 5G Trifecta premiering April 30.

New data shows that Australia has successfully weathered the storm of Beijing’s economic coercion by finding alternative markets for wine exports, which has seen growth in Europe, the UK, and the United States. Despite losses […]

New York City police keep watch on a Manhattan corner a day after a man prematurely detonated a suicide bomb in near-by Port Authority Bus Terminal on December 12, 2017 in New York City. A […]