Home prices in the U.S. increased in value during the past year at the fastest pace since the end of the 2006 real estate bubble that led to the Great Recession.

Standard & Poors (S&P) compiled an index of home prices using an analytic framework developed by economic sciences Nobel laureate Robert Shiller and data from CoreLogic. Its national real estate index, as well as indices for 20 cities, is the best set of data for comparing actual home prices through time.

It compares a home’s actual sale price to the last time that individual homesold.

Data for February 2021 from the S&P CoreLogic Case-Shiller data released on April 27 showed that home values in the U.S. increased 12 percent over the year-ago period. Perhaps most striking about the increase is that its comparative month, February 2020, occurred one month before the pandemic hit the U.S.

Home prices within the Los Angeles region climbed about the same amount as nationally; its home prices rose 11.9 percent in February 2021 from the year-ago period. 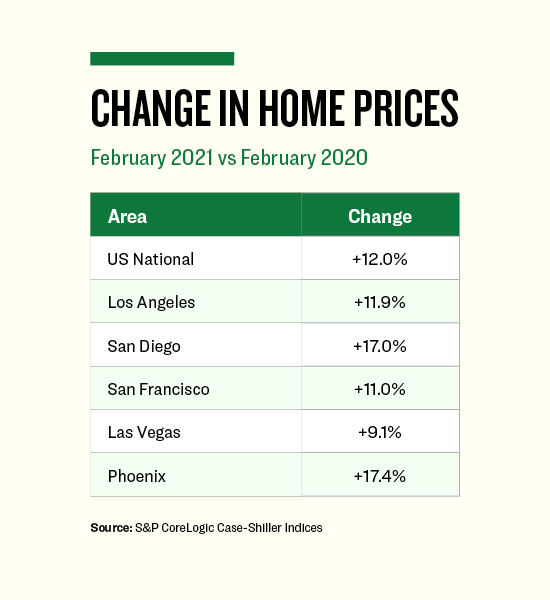 Said S&P’s Craig J. Lazzara: “The demand [for suburban homes] may represent buyers who accelerated purchases that would have happened anyway during the next several years. Alternatively, there may have been a secular change in preferences, leading to a permanent shift in the demand curve for [suburban] housing. Future data will be required to analyze this question.”

In other words, now that entertainment venues are re-opening and city center rents are lower, time will tell whether people prefer to remain in the suburbs or return to the city.

NEW YORK, NEW YORK – SEPTEMBER 11: Family, friends and colleagues of those killed in the 9/11 and the 1993 bombing terror attacks participate in the annual commemoration ceremony at the National 9/11 Memorial and […]

Kamala Harris speaks during a Tribal Nations Summit in the South Court Auditorium of the Eisenhower Executive Office Building, next to the White House, in Washington, D.C. on November 16, 2021. (Photo by BRENDAN SMIALOWSKI/AFP […]