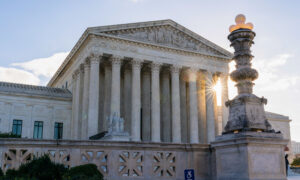 The Supreme Court heard arguments from the Biden administration that Temporary Protected Status (TPS) holders from troubled countries should not be allowed to upgrade to lawful permanent resident status from inside the United States.

The case, Sanchez v. Mayorkas, court file 20-315, comes at a time when the federal government finds itself overwhelmed by the rush of would-be immigrants flooding the nation’s southern border with Mexico, a situation President Joe Biden finally labeled a “crisis” April 17. Biden said that situation prevents him from raising the refugee quota at this time.

A ruling in favor of the petitioners could allow thousands of TPS holders now living in the United State to apply for green cards without first having to leave the country and apply from abroad.

The petitioners, Jose Sanchez and Sonia Gonzalez, a married couple from El Salvador, were represented in the telephonic hearing April 19 by Amy M. Saharia. The Department of Justice was represented by Michael R. Huston.

Chief Justice John Roberts seemed to suggest the government’s case was weak. “I was struck by the extent to which your brief undersold your position,” he told Huston.

The case revolves around whether recipients of Temporary Protected Status privileges are deemed to have been “admitted” to the United States.

The hearing consisted largely of discussions of the legal definitions of terms appearing in the Immigration and Nationality Act (INA), a statute Justice Stephen Breyer suggested during oral arguments was a difficult read.

“I have to admit the immigration statute is pretty complex,” Breyer said.

Under the program, some foreigners are allowed to stay in the United States if their country of citizenship is considered to be in crisis because of a natural disaster, armed conflict, or “extraordinary and temporary conditions.”

The Biden administration has followed the example set by the Trump administration, arguing the INA makes nearly all TPS holders ineligible to adjust their status to lawful permanent residents, or green card holders.

“From an institutional perspective, the government’s argument is somewhat counter-intuitive: In a statute that undisputedly authorizes executive discretion to alleviate hardship in the immigration process, the government argues that it should not be allowed to exercise discretion at all to noncitizens present for humanitarian reasons,” writes Maryellen Fullerton at SCOTUSblog.

During oral arguments, Huston said the government’s position was reasonable.

“An agency does not act contrary to law when it interprets a statutory term in its accordance with its statutory definition. For petitioners to be eligible to adjust to lawful permanent resident status they need to show, among several other things, that they were admitted into the United States.

“But ‘admitted’ is a defined term within the INA and petitioners concede that they do not meet that definition. They did not make a lawful entry into the United States after inspection and authorization by an immigration officer. Petitioners instead contend that Congress implicitly deemed TPS recipients to be admitted by giving them lawful status as nonimmigrants.”

Justice Brett Kavanaugh told Saharia, “you have an uphill climb.”

“If Congress was intending to do what you want, it seems almost certain there would be more explicit language.”

The latest CCP virus cluster in North Melbourne has grown to 15 cases, with 11 new infections in the past 24 hours, six of which were recorded overnight. James Merlino, the Acting Premier of Victoria, […]