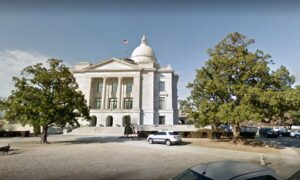 A former Republican announced on Monday that he is joining the 2022 race for Arkansas’s Attorney General as a Democrat.

Jason Davis, 34, an attorney at a law firm he opened in Little Rock,Pulaski County—Davis Law Firm, which deals with small business law, family law, bankruptcy, estate planning, and appeals—said he was running to put an end to the “hyper-partisan drama” that has been dominating state governance.

“As our state’s Attorney General, I will put you and your family first,” Davis said in a statement to news outlets. “Our state simply can’t afford more hyper-partisan drama, wasting millions more in taxpayer dollars on constant, warranted challenges to the constitutionality of our state’s actions.

“The people need a lawyer, and it’s time we had an attorney general who will put the people’s business first. We have gone without that for too long,” he added.

Originally from Saline County, Davis graduated from the University of Arkansas at Little Rock William H. Bowen School of Law. In 2018, he served as Election Commissioner for Pulaski County for one term.

He currently lives in West Little Rock with his wife and two children.

Davis also said in his announcement to run for Arkansas Attorney General, “The leaders at the very top have focused too much on national politics, moneyed interests, and the will of party leaders, too often shunning the needs and issues facing Arkansans. It’s time for us to change that.”

“The people of Arkansas deserve an attorney general who will go to work for them every single day—combatting voter suppression efforts; ensuring equal application of the law; working to end the state’s opioid crisis; and protecting Arkansas’s small businesses, workers, and consumers from outside interest and scammers,” he said.

[Premiering 6pm ET] Left Silence on Antisemitism; Vaccines vs. Natural Immunity; Memorial Day Inspiration Antisemitic attacks are on the rise—it’s happening online and on the streets, in America and around the world. But what you […]

Why Has ‘Global Warming’ Disappeared?

Commentary After President Joe Biden entered the White House, he created a position that had never existed before in the history of the White House—”Climate Envoy,” and climate policy was elevated to a level of […]

This undated handout photo provided by Christopher Harris shows George Floyd. (Christopher Harris via AP) OAN NewsroomUPDATED 10:05 AM PT — Saturday, May 30, 2020 According to a new report, a county medical […]