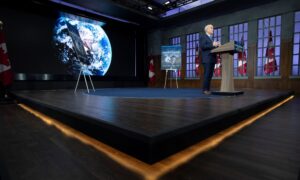 Try as I might, I just can’t find a single positive aspect of Erin O’Toole’s bizarre flip-flop in embracing a carbon tax policy after almost a year of vociferously opposing Canada’s current carbon tax.

O’Toole had already been making his core supporters uncomfortable with his policy shifts to the left in recent months. In proposing a carbon tax, he has now infuriated his own base while feeding the fires of Western alienation. There is little indication that this move will gain him the Central-Canadian electoral support that he is clearly pursuing. The only people I can envision rejoicing over O’Toole’s climate change plan are the Trudeau Liberals as they prepare for an election.

On June 18, 2020, Erin O’Toole signed a pledge with the Canadian Taxpayers Federation making it utterly clear that he would not support a carbon pricing scheme of any sort. There is little room for interpretation in his statement:

“I, Erin O’Toole, promise that, if elected Prime Minister of Canada, I will: Immediately repeal the Trudeau carbon tax; and, reject any future national carbon tax or cap-and-trade scheme.”

It is outright insulting watching O’Toole trying to play Conservative supporters for fools in trying to claim that his proposal isn’t a carbon tax. He is labelling it as a “pricing mechanism” with a “market-based approach” to reducing emissions.  Let’s be clear here. When the government puts a mandatory fee upon something for citizens, it is a bloody tax no matter how you try and paint it. O’Toole’s climate change plan is nothing more than a repackaged carbon tax and everybody knows it. He would look a little more honest if he would at least admit that. Rest assured, his honesty is in serious question right now.

Few things put off voters more effectively than dishonesty from politicians. If O’Toole was willing to blatantly mislead his own supporters in order to win the party leadership, what lies is he willing to tell to try to win the next election? Liberal candidates and campaigners will surely be asking that question repeatedly in the next election campaign and it will be an effective tactic. What reply can a Conservative candidate offer?

O’Toole’s proposed carbon tax is actually worse than the Liberal one in some aspects as it calls for what would be a monstrous bureaucracy. The scheme calls for the formation of “low carbon savings accounts” for citizens. As carbon-tax revenue is collected from citizen’s purchases, it will be placed into these accounts and held until the citizen purchases an approved item. Then the funds from the savings account will be applied to the purchase. What will the cost to set up and administer such a convoluted system be? What kind of corruption are we inviting as companies lobby to be suppliers of approved products from these savings accounts?

Most importantly, how will this do a thing to protect the environment?

Apologists for O’Toole are doggedly claiming that carbon pricing is the only way to protect the environment and that embracing a carbon tax will be the only possible way to win the next election. If indeed that is the case, they should have said so during O’Toole’s bid for the Conservative Party leadership. There was another chance to make the case for a carbon tax at the CPC’s national convention only a few weeks ago. It is clear that O’Toole knew that his conservative base would not accept a carbon tax by any definition, so he made the choice to lie to them about it.

Does O’Toole really think that voters of any political stripe will forget this blatant act of deception before a general election is called? Who on earth would choose a person to lead their nation when they have so recently demonstrated that they will throw their own supporters under the bus for political expediency?

In the next election, the best that O’Toole will be able to hope for from conservative supporters is that they will hold their noses and vote for him. Many will choose to stay home or vote for the nascent Maverick Party or the People’s Party of Canada. It is highly unlikely that O’Toole’s desperate courtship of Liberal supporters will pay off. If supporting a carbon tax is the prime issue for a voter, they will support the existing one under the Liberals. Why shift voter allegiance for a new carbon tax which has been proposed under such disingenuous circumstances?

O’Toole’s carbon tax gamble has cost him the trust and support of his base while gaining none from Liberal supporters. It was a strategic blunder of epic proportions which may very well lead to Trudeau laughing his way back into a majority government.

Cory Morgan is a columnist and business owner based in Calgary.

After the Chinese Communist Party (CCP) forcibly implemented the Hong Kong National Security Law, the education sector in the financial hub has also become a target of “rectification.” Hong Kong teachers have been disqualified or […]

A woman holds a placard reading “You can’t shut up everyone!” as journalists and supporters take part in a protest against the list of “foreign agent” media in central Moscow. (Photo by NATALIA KOLESNIKOVA/AFP via […]

White House press secretary Kayleigh McEnany speaks during a press briefing at the White House, Tuesday, May 12, 2020, in Washington. (AP Photo/Evan Vucci) OAN NewsroomUPDATED 6:58 AM PT — Friday, May 15, 2020 The […]