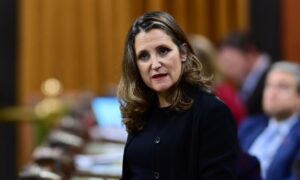 OTTAWA—The federal Liberals are betting that billions more in debt will pay itself back in economic growth by helping thousands of workers find jobs and small businesses adapt to shifting consumer behaviour.

The government’s budget today estimates all the spending should create or maintain some 330,000 jobs next year and add about two percentage points to economic growth.

The largest contributor is $30 billion over five years on top of existing planned child-care spending to drive down fees in licensed daycares and eventually get to $10 a day by 2026.

There is also more money for broadband infrastructure and over $1.6 billion in funding for small and medium-sized businesses to make sure they aren’t left behind by the dash to online shopping.

All that extra spending with few new taxes will send the deficit to $154.7 billion this fiscal year, one year after a record-smashing $354.2 billion deficit induced by the pandemic.

But first, the Liberals plan to keep open the taps of emergency aid until at least the fall as the labour market and businesses continue to struggle under the weight of COVID-19.

President Joe Biden speaks during a celebration of the Americans with Disabilities Act, and to mark Disability Pride Month, in the Rose Garden of the White House, Wednesday, Sept. 28, 2022, in Washington. (AP Photo/Evan […]