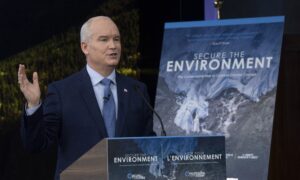 Albertans more than those in any other jurisdiction are opposed to a carbon tax, and many in the heart of Tory territory are expressing displeasure with the Conservative Party’s newly introduced price on CO2.

Franco Terrazzano, Alberta director for the Canadian Taxpayers Federation (CTF), told The Epoch Times that many in the province are upset.

“A lot of taxpayers’ blood is boiling right now,” Terrazzano said, noting Conservative Leader Erin O’Toole’s previous promises not to impose a carbon tax if he became prime minister, including when he was running for leadership of the party last summer.

At a CTF media event last June, O’Toole signed a pledge where he promised to “Immediately repeal the Trudeau carbon tax; and reject any future national carbon tax or cap-and-trade scheme,” should he be elected.

However, on April 15 this year, he proposed a carbon pricing system where a levy on consumer purchases would give the buyer so-called loyalty points. These could be spent on government-approved products to “live a greener life,” such as buying a bike or transit passes or making homes and cars more energy-efficient.

O’Toole characterized the plan as “a smart, market-based, transparent approach to reduce emissions.”

Terrazzano says a tax is a tax by any other name no matter what messaging is used, and says it’s unacceptable to “hammer Canadians with higher fuel bills through a carbon tax.”

The carbon pricing scheme starts at $20 a tonne, but O’Toole promises it won’t go past $50. Terrazzano has his doubts.

“Remember, Liberal Party politicians told us that they had no intention of raising the carbon tax past $50 per tonne, and now we’re getting a Trudeau tax up to $170 per tonne [by 2030], so I think Canadians should be highly skeptical,” he said.

Rumours of a Conservative carbon tax plan began to surface in early March. A Mainstreet Research poll conducted last September suggested O’Toole might gain votes from an extra 1.7 percent of Ontarians if he embraced carbon taxes.

However, a more recent Mainstreet Research poll conducted March 21 and 22 showed carbon taxes had dropped in popularity over the previous six months. The results suggested an O’Toole flip-flop would lose the leader 16 percent of the vote in Alberta if an election had been held that month. And he would lose 15 percent of the vote in the Saskatchewan-Manitoba zone, 10 percent in B.C. and Ontario, and 4 percent in Quebec.

Barry Cooper, political science professor at the University of Calgary, believes the proposed policy is a gift to western independence parties already invigorated by the Supreme Court of Canada decision at the end of March, which declared Trudeau’s carbon pricing policy to be constitutional.

“That’s a losing strategy,” he said.

Trevor Tombe, an economics professor at the University of Calgary, says a price on carbon is as good a tool as any to lower carbon emissions.

“The carbon tax is just one way of putting on that price to provide an incentive for individuals to think about their own circumstance and make decisions to lower emissions in the cheapest way possible for them,” Tombe told The Epoch Times.

“This is in contrast to other ways that governments tend to approach emissions reductions, by subsidizing technologies or mandating firms to adopt certain types of equipment, or mandating that fuel is composed of this or that share of biofuel.”

Kenneth Green, an environmental scientist and a senior fellow with the Fraser Institute, called O’Toole’s plan “a new twist on the carbon tax” in a commentary for the institute.

“The O’Toole plan is nothing new and will probably satisfy no one other than, perhaps, peddlers of low-carbon goods and services who will get a new captive market,” he wrote.

“The new program (like the old program) probably won’t actually reduce GHG emissions in any way that might actually influence the climate, no matter how serious one holds climate change to be.”

O’Toole’s proposal includes both a carbon price and government mandates. Terrazzano expressed concern about the “added complexity, the added administration” in the O’Toole plan, which he called “extremely paternalistic.”

“If O’Toole wants to form an environmental plan, he needs to go back to the drawing board and figure out one that doesn’t hammer Canadian families, workers, and businesses,” he said.

Amazon founder Jeff Bezos on Wednesday led his last shareholder meeting as CEO, announcing the date on which he’ll pass the reins to his replacement while highlighting challenges going forward and pushing back against claims that […]

NEWPORT BEACH, Calif.—The Newport to Ensenada International Yacht Race (N2E) hosted by the Newport Ocean Sailing Association, returns April 23 after a year-long COVID-19 pandemic postponement of the tradition. It marks the 73rd year for the sailing competition, with nearly […]