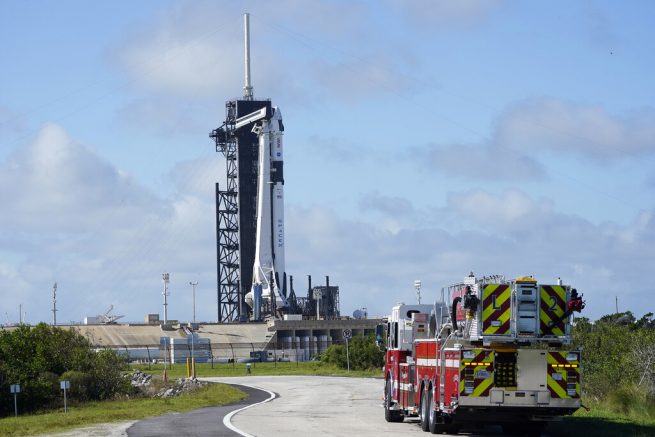 NASA firefighters drive on the road outside the fence near a SpaceX Falcon 9 rocket, with the company’s Crew Dragon capsule attached, sits on the launch pad at Launch Complex 39A Friday, Nov. 13, 2020, at the Kennedy Space Center in Cape Canaveral, Fla. Four astronauts will fly on the SpaceX Crew-1 mission to the International Space Station scheduled for launch on Nov. 14, 2020 (AP Photo/Chris O’Meara)

NASA and aerospace company SpaceX are preparing to blast off into space this weekend with a historic launch, marking SpaceX’s first fully operational spaceflight with a full crew.

The launch will take place at the Kennedy Space Center in Florida, sending three Americans and one Japanese astronaut to the International Space Station.

Tomorrow, four astronauts will head to the @Space_Station for a six-month science mission in the Crew Dragon spacecraft. Tune in:

Originally, the Crew-1 mission intended to start their journey on Saturday, but the launch has been pushed back to Sunday due to weather interference caused by Tropical Storm Eta.

This mission will mark the first time the U.S. has used its own technology to send its astronauts into space after retiring the Space Shuttle program back in 2011.

Officials said the success of the Crew-1 mission will set a precedent for space travel and future missions, opening up a gateway to the final frontier.

‘We’re thinking about programs that last, not just decades, but even a generation,” Bridenstine continued. “I would like to see a day when my children are my age and we have people living and working on the Moon, and, in fact, on Mars.”

If all goes as planned, officials in the Sunshine State estimate roughly 250,000 observers will be in attendance in order to witness the rocket blast off into space.

MORE NEWS: Republicans likely to keep Senate and gain ground in the House

FILE – In this Oct. 8, 2013, file photo, a sign marks the entrance to the federal Centers for Disease Control and Prevention in Atlanta. (AP Photo/David Goldman, File) OAN NewsroomUPDATED 11:50 AM PT — […]