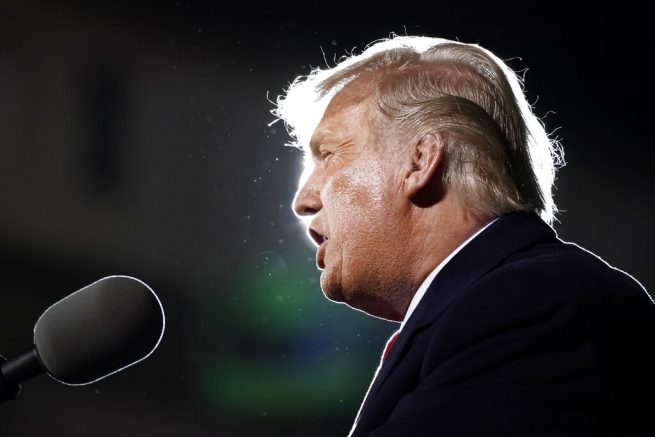 President Trump continued to rally with his supporters across the United States in Minnesota on Wednesday night as part of his Make America Great Again campaign.

The Commander-in-Chief spoke on a number topics from highlighting his recent victory against Democrat nominee Joe Biden in the first presidential debate to slamming the mainstream media for their biased and corrupt reporting.

“Liberal media — it’s upset that I took the fight to Biden and exposed is very dangerous agenda,” he stated. “I’m not just running against Joe Biden, I’m running against the corrupt far-left media, socialists and communists in the Democratic Party.”

In just 3 and a half years, we have secured America’s Borders, rebuilt the awesome power of the U.S. Military, obliterated the ISIS caliphate, fixed our disastrous Trade Deals, and brought JOBS back home to America – and back to MINNESOTA! #MAGA pic.twitter.com/nX2oU5IWL0

While talking about his performance during the first presidential debate, President Trump said he was able to hold his own while on the stage despite debating not just Biden, but also moderator Chris Wallace while up at podium. He also said Biden is too weak to lead as shown by some of his Democrat supporters urging him to drop out from the next debates.

“Last night, I did what the corrupt media refused to do: I held Joe Biden accountable to his 47 years of lies, 47 years of betrayal, 47 years of failure,” the President told the crowd. “I held Joe accountable for shipping your jobs and dreams abroad, and for bowing to the violent mob at home.”

PresidentTrump then urged for Americans to make sure they vote in November and highlighted the importance of working class citizens in the Bread and Butter State. Minnesota hasn’t been won by a Republican since 1972, however, the President has expressed confidence he can switch the state back to red.

MILWAUKEE, WISCONSIN – NOVEMBER 20: Election officials wait as procedural issues are argued during the process of recounting ballots from the November 3 election at the Wisconsin Center on November 20, 2020 in Milwaukee, Wisconsin. […]

‘Ring of Fire’ Solar Eclipse to Appear in the Sky Next Month—Here’s What You Need to Know:

A “ring of fire” eclipse will occur next month over Canada and its environs; and will be visible from the remote areas of north Ontario, Russia, Greenland, and Polar Bear Provincial Park (located on the […]