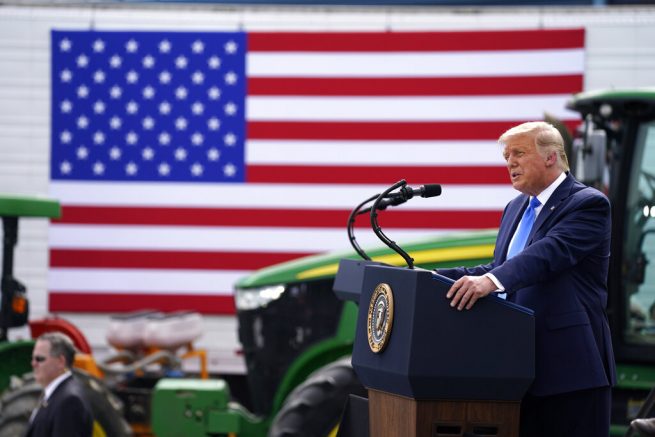 President Trump made his rounds in North Carolina on Monday, just before accepting the Republican nomination for his reelection bid. He addressed supporters in Fletcher before giving remarks at a food bank in Mills River.

During his visit to the food bank, the president announced he would approve an additional $1 billion to the Farmers to Families Food Box program.

“I’m proud to announce that we will provide an additional $1 billion dollars to fund the Farmers to Families Food Box programs,” he stated. “It’s worked out so well.”

Under the program, the Department of Agriculture buys food from farmers and distributes it to local churches,food banks and non profit organizations.

Roughly 7,000 boxes have been delivered each week! pic.twitter.com/Yx6JXyUHCm

The initiative has reportedly delivered roughly 70 million boxes to families in need and was first launched in response to the coronavirus pandemic. Senior White House adviser Ivanka Trump has called the historic program “a big win for the American people.”

Our Farmers to Families Food Box Program has fed more than 100 Million meals to people since its launch just weeks ago in response to COVID-19.

This Soup Is a Blank Canvas for Practicing Your Garnishing Skills

Sometimes, the simpler the recipe, the easier it is to overcomplicate it. Case in point: carrot-ginger soup, whose flavors often get elbowed out with the addition of other vegetables, fruits, or excessive dairy. But this […]

The Australian Government Is an ‘Equal Opportunity’ Offender of Civilian Rights

Commentary Australians stuck overseas should not feel unwelcome to return home. Yet, from this week, any citizen flying back from India must contend with sanctions. The maximum penalties include a $66,000 fine or a five-year […]