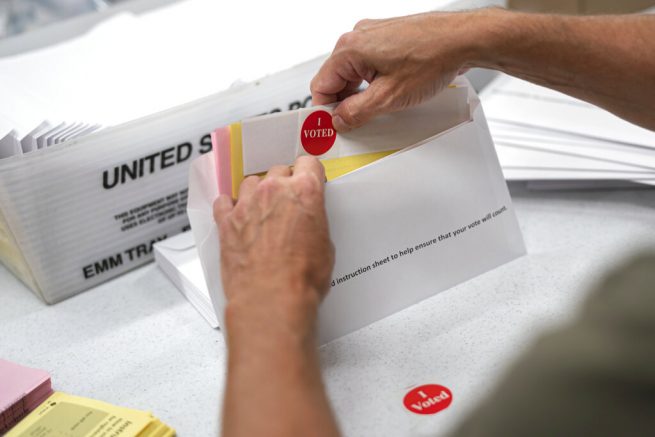 FILE – In this July 29, 2020, file photo, mail in ballot envelopes including an I Voted sticker are prepared in Minneapolis. (Glen Stubbe/Star Tribune via AP, File)

President Trump recently highlighted reports of alleged fraudulent mail-in ballots found in Detroit. He took to Twitter on Monday to share a report, which noted that at least 20,000 unverified absentee ballots were counted in a recent primary election in the Michigan city.

Exclusive: Eyewitness Says as Many as 20,000 Unverified Absentee Ballots Counted in Detroit Primary https://t.co/za6Yr37RUu via @BreitbartNews

That’s according to pollster Bob Cushman who said the count of absentee ballots in Detroit was chaotic. He stated that suspicious absentee ballots were delivered in a car with Ohio license plates and it’s unclear where those ballots came from or who filled them in. He also noted that this injection of ballots should make the votes illegitimate.

President Joe Biden responds to a question after speaking about the March jobs report in the State Dining Room of the White House, Friday, April 2, 2021, in Washington. (AP Photo/Andrew Harnik) OAN NewsroomUPDATED 9:00 […]