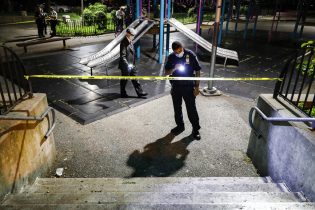 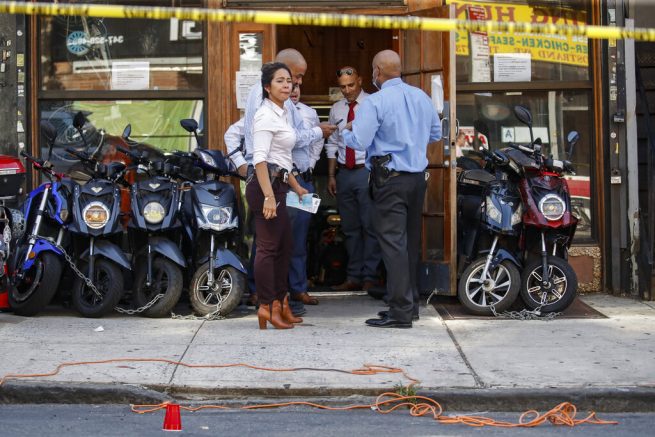 FILE – Police officers respond to a crime scene on Nostrand Avenue, where a 23-year-old man was discovered with gunshot wounds to his legs and torso before being transported to a hospital where he died from his injuries, in the Brooklyn borough of New York in a Saturday, July 18, 2020 file photo. (AP Photo/John Minchillo, File)

New York City has seen a colossal spike in violent crime. This past weekend’s crime rate increased 600 percent compared to the same time last year and experts believe calls to dismantle the police are contributing to that statistic.

The issue has gotten so out of hand it prompted President Trump to tweet this late Sunday:

However, according to Mayor Bill de Blasio, it’s the president that’s the issue. The Democrat said he won’t be relying on the White House to solve New York’s crime problem.

“The president blusters and the president tries to draw attention to himself, and rarely has much to back it up,” claimed de Blasio. “The bottom line is the NYPD is obviously, as they have done for decades upon decades, they are the people who can help us address this issue and end this violence.” 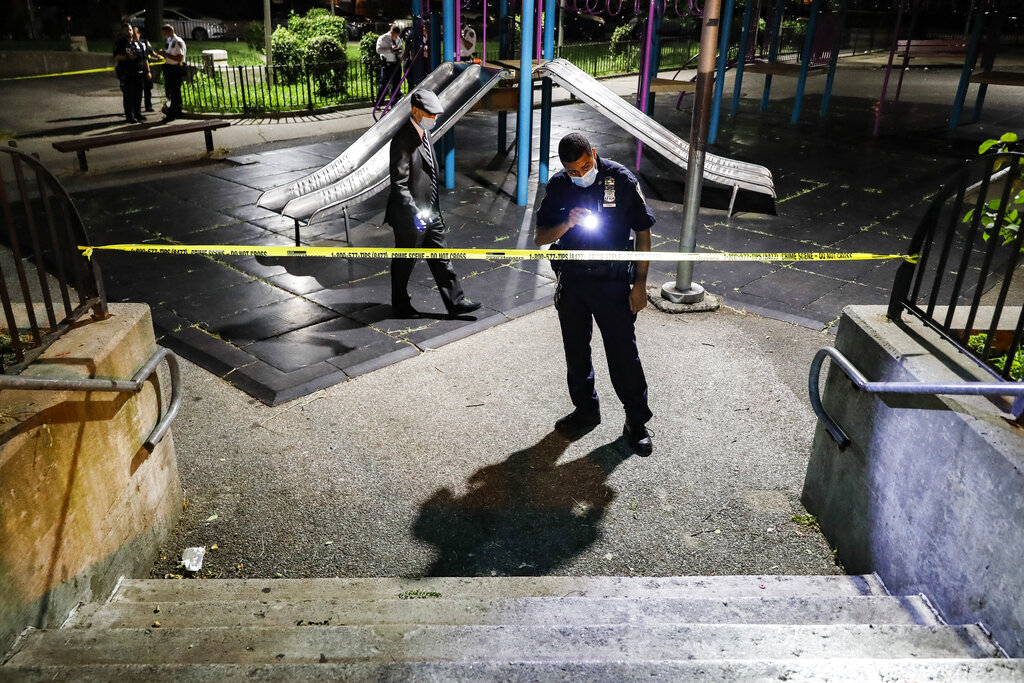 Police officers search a playground for evidence at a crime scene where two individuals were injured by gunshots on Atlantic Avenue, Saturday, July 18, 2020, in the Brooklyn borough of New York. (AP Photo/John Minchillo, File)

Gov. Cuomo took heat Monday after commenting ahead of the weekend that President Trump was liable for some of the violence in the city.

“The genesis of the crime you can have a great debate about, but the Trump economy, Trump not providing COVID relief, George Floyd’s murder, Trump’s response to the George Floyd murder, race relation stress…so, I think Trump has some liability for the increase in crime,” he stated.

Those comments didn’t age well after the city saw 43 people injured in 32 separate incidents throughout the weekend. In light of the weekend violence, conservative New Yorkers turned up the heat on Cuomo for denying the president’s offer to send in federal agents to quell unrest in the city in late July.

Looking forward to November, the president appears intent to capitalize off of the spike in crime and New York’s sky-high taxes in a bid to turn the state red in November.

FILE – This March 31, 2020, file photo shows members of an Arizona National Guard unit loading up a Black Hawk helicopter to deliver medical supplies to the remote Navajo Nation town of Kayenta due […]

US Airlines Should Be Extremely Cautious While Passing Belarus: FAA

The Federal Aviation Administration (FAA) announced that U.S.-based airline companies should exercise “extreme caution” when flying over Belarus. The transportation agency and governmental body of the United States released a statement after authorities from the Eastern […]