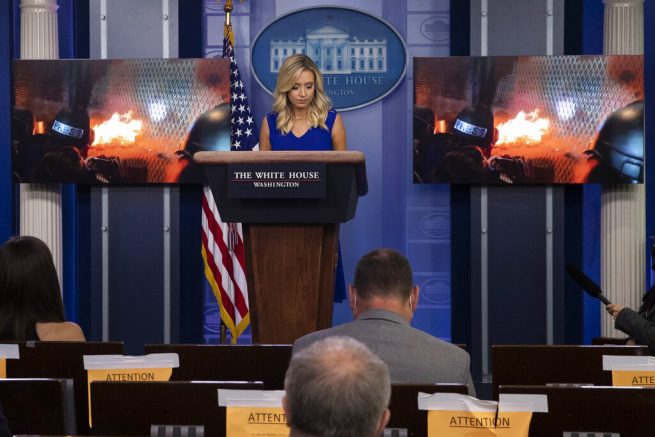 On Friday, Press Secretary Kayleigh McEnany defended the recent deployment of federal agents to Portland. Her support of the effort, which was undertaken by the Trump administration in a bid to quell a recent outbreak of riots, came during a press briefing at the White House.

She detailed the violent conditions endured by officers on the ground, who have been engaged in the protection of federal property during the now more than 50 nights of consecutive protests in the city.

“Our brave officers have faced all of these various things, like rioters barricading the Hatfield Courthouse, trapping officers inside. A ‘commercial grade mortar firework’ was launched by rioters. A federal agent’s hand was impaled by planted nails. Another federal agent was shot with a pellet gun, leaving a wound deep to the bone. Tragically, three federal officers were likely left permanently blinded by the rioters, (who were) using lasers pointed directly at their eyes.” – Kayleigh McEnany, White House Press Secretary

That same night, rioters also attempted to cut off the building’s water supply to “make it a nightmare for officers inside.”

Rioters carrying shields rush back to the Portland federal courthouse after law enforcement return inside. Rioters cheer and celebrate, claiming it to be a battle victory. #PortlandRiots #antifa pic.twitter.com/UORcZiuOBW 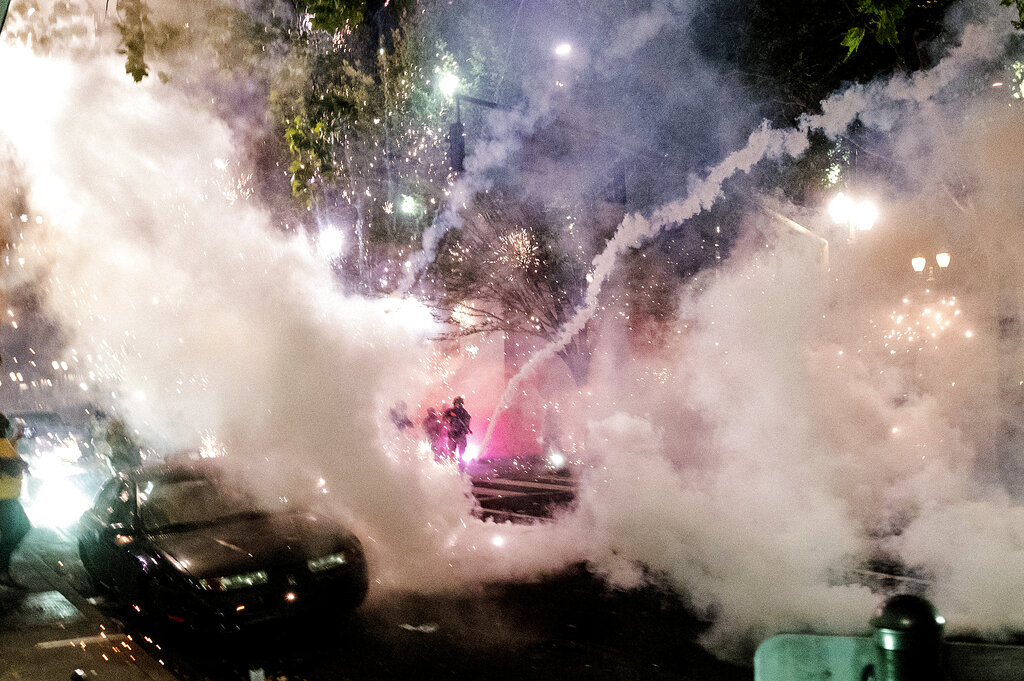 The decision to deploy DHS officers to Portland has been rejected by Democrat politicians, who have gone so far as to suggest the order was unlawful.

The press secretary has soundly rejected this claim.

“There’s Operation Legend, which is primarily led by DOJ, that’s just providing FBI, ATF and DEA agents to already existing places…that are out of control, like Chicago for instance,” stated McEnany. “(It’s) separate and distinct from Portland, which is DHS.”

Legal precedent is likely on the administration’s side, as pointed out by the press secretary. U.S. Code Title 40, Section 1315 explicitly grants the Department of Homeland Security the ability to designate officers under its jurisdiction for the duty of protecting federal buildings.

According to federal law, DHS agents are allowed to make arrests related to crimes committed in the officers’ presence within an area of up to 100 miles from the nearest external border, which, in this case, includes the city of Portland.

Rioters, including a “mom” protester, try to pull down the barrier protecting the federal courthouse with rope. Video by @VenturaReport. #antifa #PortlandRiots pic.twitter.com/gb2PFkrtUs 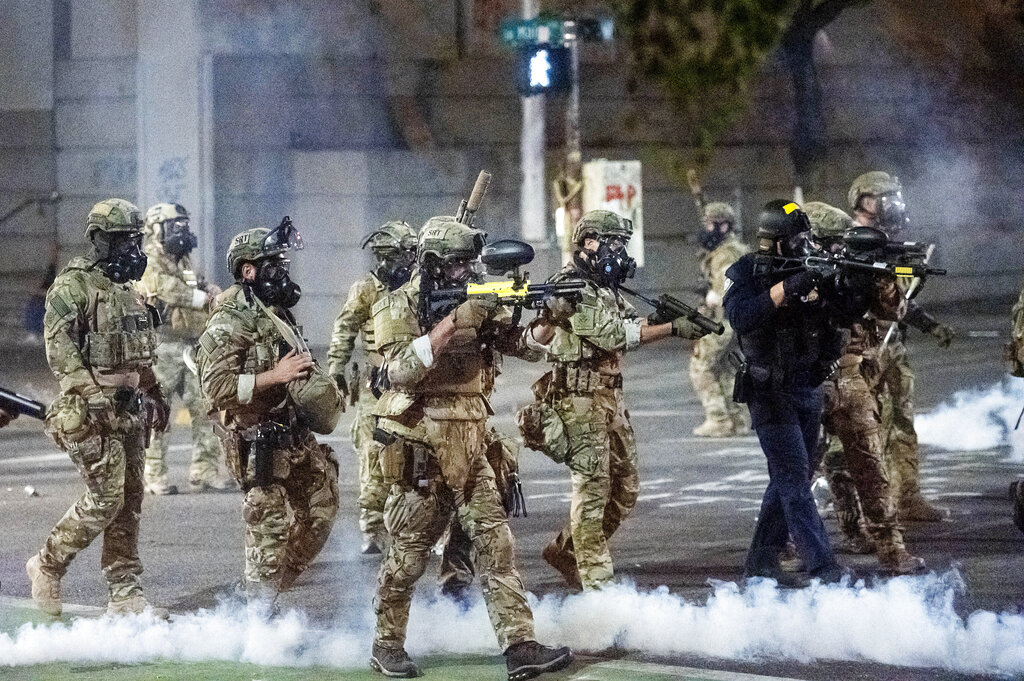 McEnany pointed out the federal government has a duty to maintain order and protect federal property, despite what she described as “unconstructive attitudes” from left-wing political leaders.

“The federal government has a sworn duty to uphold the laws of the United States through field offices and federal facilities across the country. These agents protect and serve the American people. Yet, the rhetoric of the left undermines our justice system, with Nancy Pelosi calling them ‘Stormtroopers,’ Jim Clyburn calling them the ‘Gestapo,’ and Wheeler using the term ‘paramilitary forces.’” – Kayleigh McEnany, White House Press Secretary

DHS Secretary Chad Wolf and Deputy Secretary Ken Cuccinelli slammed top Democrats for this description. On Friday, Wolf called the comparison “disgusting” and claimed it is “an assault on
every officer who swore to protect our communities.”

In a separate interview, Cuccinelli stated lawmakers who use terms like “Nazi” and “Stormtroopers” should know better. He added if he worked for agencies like Customs and Border Patrol or the FBI, he would have sued for libel.

Explosions and tear gas push rioters back after they keep ignoring commands to stop breaking down the barrier protecting the courthouse. #PortlandRiots pic.twitter.com/C0YVuLbZ9b 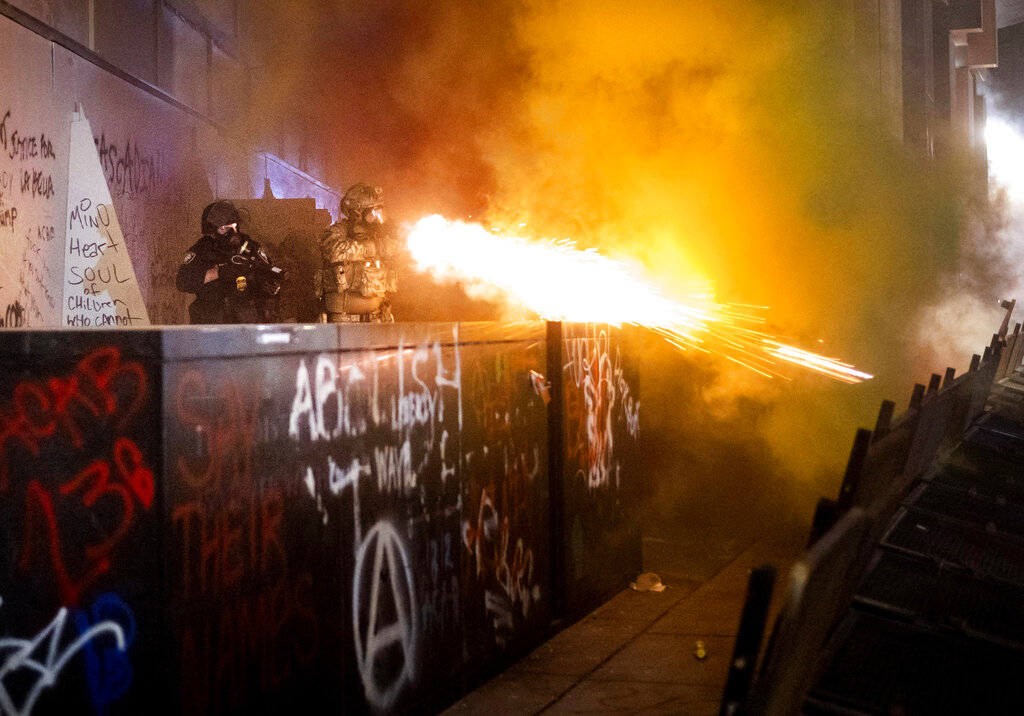 House Minority Leader Kevin McCarthy (R-Calif.) said that President Joe Biden’s infrastructure proposals would create significant inflation, which would thereby act as a “tax” for people who make less than $400,000. Biden and his deputies […]

Dem. Rep. Luria: Liz Cheney should be face of GOP

A vial of a children’s dose of the Pfizer-BioNTech Covid-19 vaccine sits in the foreground as children play in a hospital room waiting to be able to receive the vaccine at Hartford Hospital in Hartford, […]