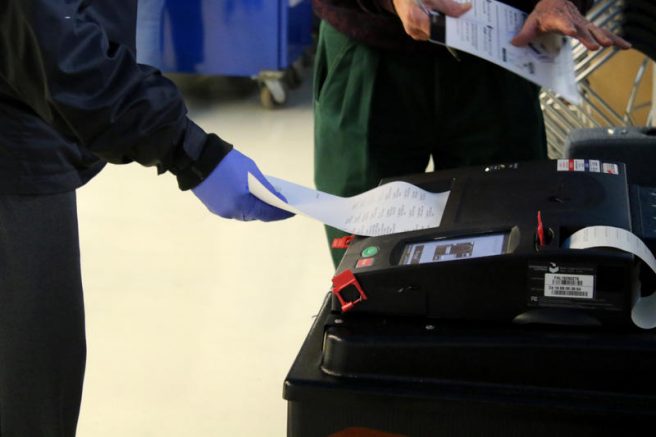 In this Saturday, March 14, 2020 photo, voters cast their ballots during early voting in Chicago while wearing protective gloves. Residents and poll workers took extra precautions amid concerns over the coronavirus. (AP Photo/Noreen Nasir)

A top Department of Homeland Security official, Christopher Krebs, said this year’s general elections are going to be the “most secure in modern history.”

On Friday, the head of the Cybersecurity and Infrastructure Security Agency, or CISA, stressed that he’s working to patch holes exposed during the 2016 Presidential Election.

Krebs confirmed the agency is partnering with state and local governments to monitor any attempts to infiltrate our election systems. He compared the 2016 election to the Sputnik launch in 1957 by saying both events shook up the American public.

“That missile — that ICBM effectively — that put Sputnik into space demonstrated an ability to reach out and touch us,” he stated. “2016, I think, was sort of a similar wake up call…this was truly an affront to the American people because it demonstrated the potentiality to undermine democracy at large.”

Want to learn more about election security in the era of #COVID19? Register to watch @CISAKrebs speak at the @BrookingsInst event today at 2pm (EDT): https://t.co/c3M5yXTwYr #ElectionSecurity #Protect2020

Krebs warned that foreign countries could launch a coordinated attack on the election, but the agency has yet to see such efforts.

Chairman of the Joint Chiefs of Staff Gen. Mark Milley listens to a Senators question during a Senate Armed Services Committee hearing on the conclusion of military operations in Afghanistan and plans for future counterterrorism […]

TOPSHOT – Children listen to their teacher as they sit in a classroom. ( MARTIN BUREAU/AFP via Getty Images) OAN NewsroomUPDATED 12:14 PM PT – Wednesday, March 2, 2022 Health experts are raising alarms about […]

Pompeo: We have truly upended the status quo