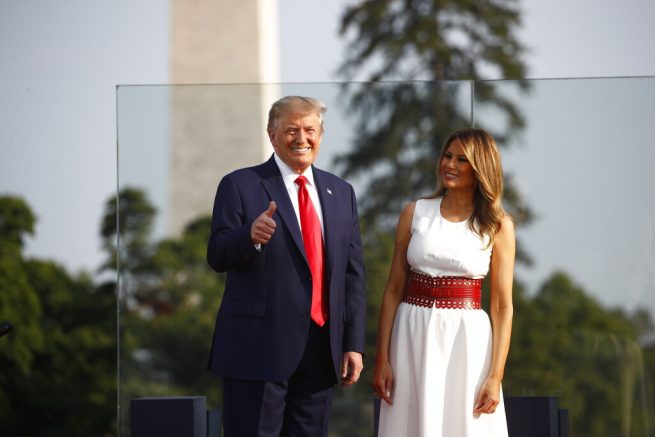 President Donald Trump and first lady Melania Trump arrives at a “Salute to America” event on the South Lawn of the White House, Saturday, July 4, 2020, in Washington. (AP Photo/Patrick Semansky)

Following the recent spike in coronavirus cases, the White House gave an update on the development of a potential vaccine.

During Saturday’s “Salute to America” event, President Trump made big promises regarding the timeline of the forthcoming vaccine. He suggested it could be ready before the end of this year.

“We are unleashing our nation’s scientific brilliance,” stated the president. “We’ll likely have a therapeutic and/or vaccine solution long before the end of the year.”

More than 140 research teams are racing to find a safe and effective solution. The creation of a vaccine includes five steps, starting with the preclinical phase.

The process typically takes years, but scientists are aiming to produce a vaccine within 12 to 18 months. There are currently over 100 different coronavirus vaccines in the making.

Some are even in large-scale efficiency trials, and several manufacturers have promised millions of doses by early 2021. 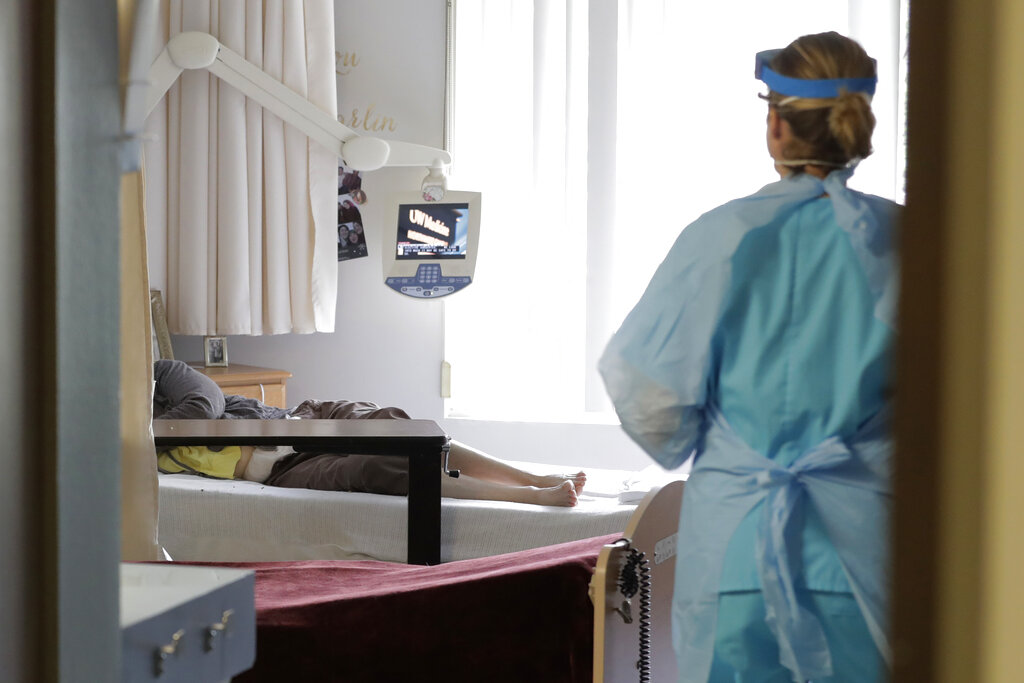 FILE – In this Friday, April 17, 2020 file photo, a health worker arrives to take a nose swab sample as part of testing for the COVID-19 coronavirus at a nursing and rehabilitation facility in Seattle. (AP Photo/Ted S. Warren)

On Thursday, Dr. Anthony Fauci also expressed optimism about the emergence of the vaccine. He noted there is a misconception that one vaccine will emerge as the winner, whereas the hope is to produce multiple effective vaccines.

“When you have two or three companies, which you hope will be successful, they are going to be making a vaccine not only for their own country, but availability in other countries,” he said.

FDA Commissioner Dr. Stephen Hahn has voiced some uncertainty regarding the timing of these efforts. During a recent interview, he claimed he cannot predict the timeline of the coronavirus vaccine.

However, he acknowledged there has been unprecedented speed in the development of the vaccine and added the FDA will produce a timeline once they have data to do so.

“When those data become available, and I hope those data are available sooner rather than later, we will make that judgment,” said Hahn.

In the meantime, the fatality rate of COVID-19 is reportedly going down, despite the recent rise in cases.

Former FDA Commissioner Scott Gottlieb confirmed this information on Sunday. He cited recent advances in care and the fact more young people, who are less vulnerable, are at the center of the current spike.

He also suggested officials are doing a better job nationally of protecting vulnerable populations, such as those in nursing homes.

“The case fatality rate is going down, although we’re not able to measure it right now,” he said. 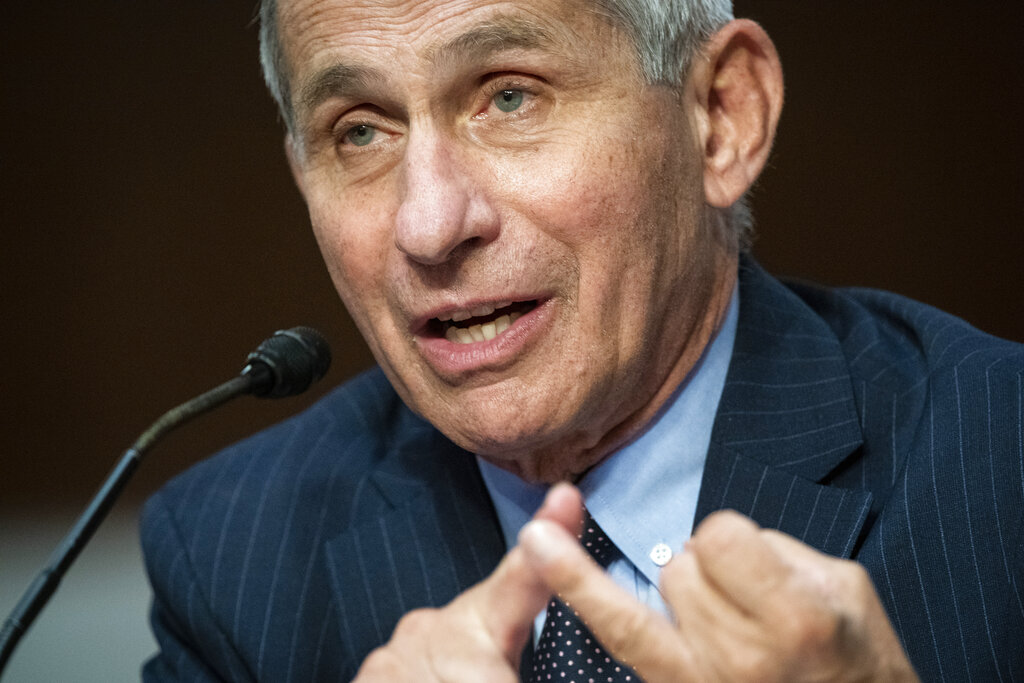 President Trump echoed these remarks on Saturday when he announced “deaths and the all important mortality rate goes down.”

“You don’t hear about that from the fake news,” he added.

….In a certain way, our tremendous Testing success gives the Fake News Media all they want, CASES. In the meantime, Deaths and the all important Mortality Rate goes down. You don’t hear about that from the Fake News, and you never will. Anybody need any Ventilators??? 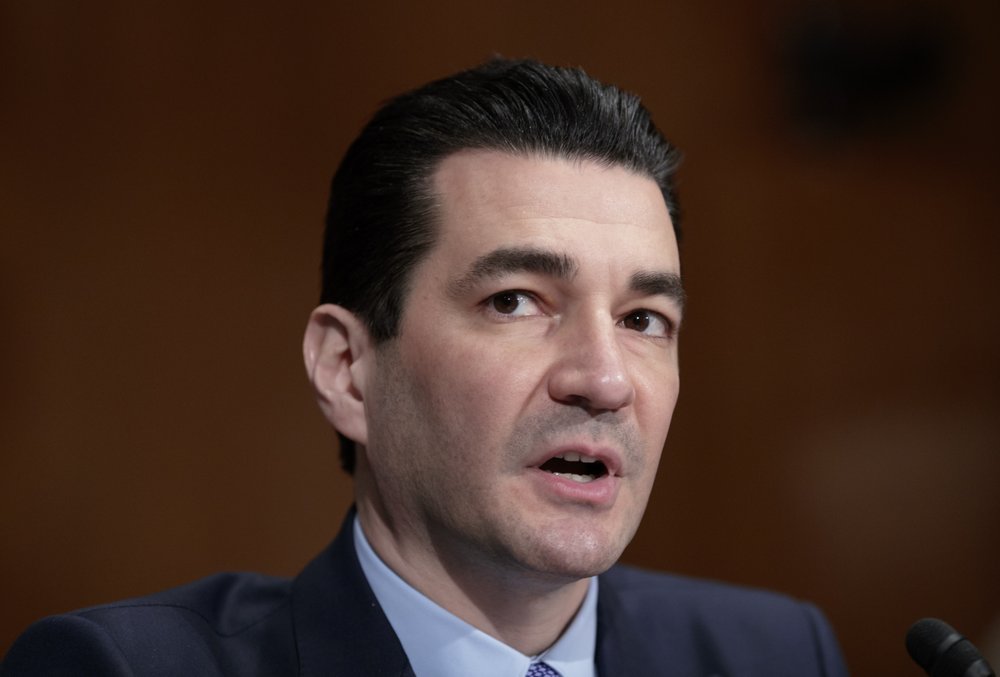 Gottlieb responded to the remarks by stressing the president’s point.

“We shouldn’t just focus on the crude mortality rate, the number of deaths, to tell the story of what’s happening medically,” stated the former FDA official. “Medically, we are improving.”

Despite the progress, he has said we will likely see a rise in the number of deaths across the country in the coming weeks. He compared the current surge to the rate of infections to New York City during the peak of its outbreak.

“The total number of deaths is going to start going up again as the number of hospitalizations starts to spike again. That doesn’t mean the case fatality rate, the actual death rate, isn’t declining. …The difference now is that we really had one epicenter of spread when New York was going through its hardship. Now, we really have four major epicenters of spread: Los Angeles, cities in Texas, Florida and Arizona.” – Scott Gottlieb, former Commissioner of the Food and Drug Administration

GRIM WARNING: “The total number of deaths is going to start going up again,” @ScottGottliebMD tells @margbrennan as #COVID19 epidemics in places such as Florida and Arizona worsen and more Americans are hospitalized pic.twitter.com/lAR6CDu2Zx

Moving forward, Gottlieb reiterated it’s important to understand the difference in coronavirus case infections versus the rate of deaths caused by the virus.

Australian researchers recommend we rinse our rice to avoid ingesting plastics, according to a world-first study measuring the levels of microplastic in rice. The lead author of the research, Jake O’Brien, said that people might consume 3 […]