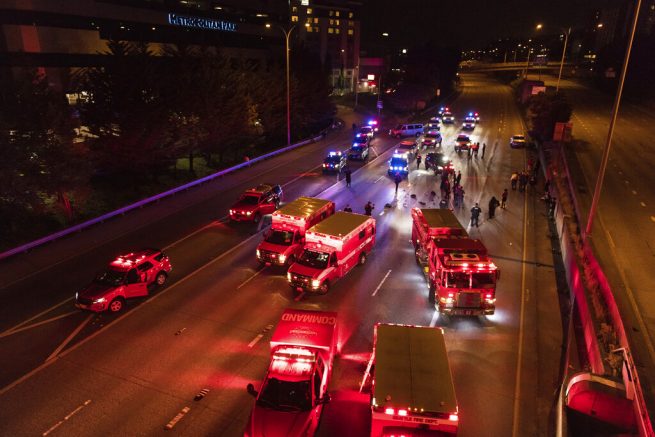 Emergency personnel work at the site where a driver sped through a protest-related closure on the Interstate 5 freeway in Seattle, authorities said early Saturday, July 4, 2020. James Anderson via AP)

A Washington man was taken into custody this weekend on two counts of vehicular assault. Authorities arrested 27-year-old Dawit Kelete after he allegedly drove his car into a group of protesters in Seattle early on Saturday.

The peaceful protest against police brutality was being held near downtown in a section of the I-5 freeway, which has been closed off for approximately 19 days due to the demonstrations.

Video footage showed Kelete allegedly driving around road blocks, which barred off the freeway section, and into the group of protesters at high speed.

The following footage could be considered graphic.

“I heard someone yell, ‘A car, a car!’ I did see the car move through the crowd and I saw the protesters hit. It was a terrible scene.” – Mark Taylor-Canfield, citizen journalist 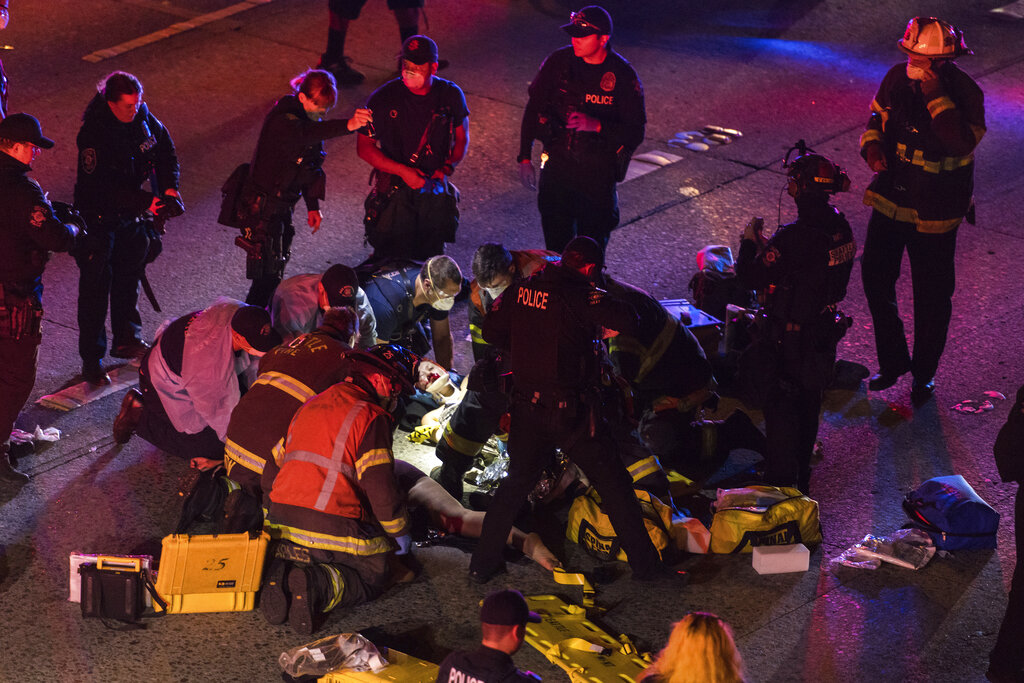 Emergency workers tend to an injured person on the ground after a driver sped through a protest-related closure on the Interstate 5 freeway in Seattle, authorities said early Saturday, July 4, 2020. Dawit Kelete, 27, has been arrested and booked on two counts of vehicular assault. (James Anderson via AP)

The vehicle, a white Jaguar sedan, fled after appearing to strike two young women. One of the victims, 32-year-old Diaz Love, was live streaming the event to Facebook until the video came to an abrupt halt.

Love is still in the hospital, where she remains in serious condition.

Content WARNING. This is independent journalist, Diaz Love, who has been covering Seattle. She and a group of people were apparently hit by a car a short time ago. #SeattleProtest #CHOP #BlackLivesMatter pic.twitter.com/q5Som8PZgD

The other victim, 24-year-old Summer Taylor, died in the hospital Saturday night.

Absolutely heartbreaking. Summer Taylor was only 24-years-old, peacefully protesting for Black Lives Matter when they were struck by a car. Thinking of their family during this difficult time and everyone in the movement today. pic.twitter.com/i7hqkjSSMH

According to authorities, Kelete currently faces charges for vehicular assault and felony hit-and-run. However, these could be upgraded as the investigation develops.

Police say the driver who hit protesters standing on the I-5 at night has been identified as 27-year-old Dawit Kelete. pic.twitter.com/qOwZb7ULgQ

First responders reported he was sullen when he was taken into custody and asked if the victims were doing okay. Kelete reportedly did not have any drugs or alcohol in his system at the time and the motive behind the attack is still unknown.

The suspect is currently in King County Jail and his first court date is set for Monday.

In the meantime, authorities are cracking down on future dangerous and illegal freeway demonstrations like this.

“We will block their access,” explained one official. “If they go around and they actually do go out on the freeway, they will be arrested.”

‘Communism Has Infiltrated America and the World,’ Warns a Persecuted Chinese Refugee

A Chinese woman who fled overseas in late 2019 has endured a life many in the West would find unfathomable. Unlawfully incarcerated and tortured in Chinese prisons for her faith, she describes her experience as […]

7 Ways to Update a Basic Bathroom

Sure, the ever-functional bathroom is sometimes swept aside in favor of decorating more grandiose rooms. But your bathroom doesn’t have to be boring! It’s the little details that count, so we’ve rounded up seven easy […]