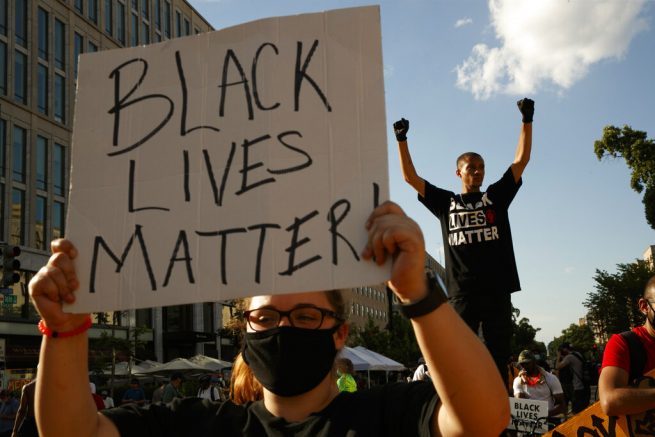 FILE – In this June 24, 2020, file photo, Antonio Mingo, right, holds his fists in the air as demonstrators protest in front of a police line on a section of 16th Street that’s been renamed Black Lives Matter Plaza, in Washington. (AP Photo/Jacquelyn Martin, File)

Black Lives Matter activists joined forces with the Boogaloo movement at a pro-Second Amendment rally in Richmond, Virginia. According to reports, dozens of far-left and right-wing activists took to the streets on Saturday to denounce the government and police violence.

The joint demonstration denounced the deaths of black and white people in recent raids by the police.

“Whether you don’t like white people or black people, you should have the right to defend yourself at all times,” stated one protester.

Activists also called on all Americans to unite in the face of government tyranny.

Protesters expressed they are frustrated with government policies, regardless of their political views.

OAN NewsroomUPDATED 7:33 AM PT – Wednesday, April 27, 2022 Authorities in Wisconsin find the body of a missing 10-year-old girl. One America’s Cynthia Kaui has the details. MORE NEWS: Defense Secy. Austin: Nations Around The […]

Low-level crack cocaine defendants should benefit from a 2018 federal law that reduced prison sentences for certain offenses, the Biden administration told largely unreceptive members of the Supreme Court May 4. Although then-President Donald Trump […]

The South Australian and Federal governments have signed an AU$1.08 billion (US$834 million) agreement to provide South Australians with reliable and affordable energy while maintaining emission reduction targets. The deal involves a $100 million energy […]