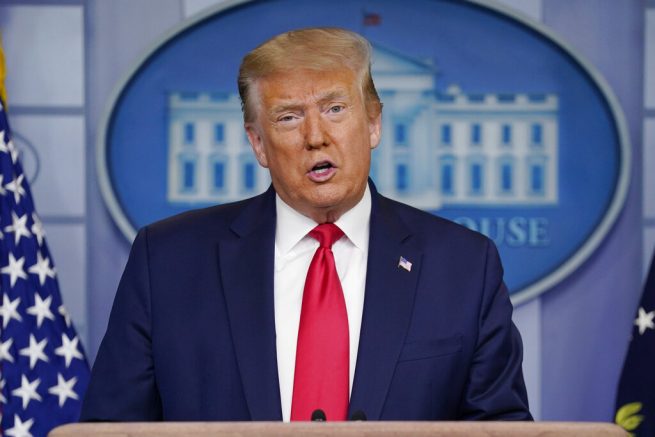 President Trump is once again blasting the New York Times. On Twitter, the president called the Times a “very corrupt and dishonest media outlet.”

He suggested the newspaper suffers from “Trump derangement syndrome.” The term referenced irrational criticisms of the president not relating to actual policy positions.

The @nytimes is a very corrupt and dishonest media outlet that suffers TDS at a level rarely seen. They will lose any remaining credibility on the evening of November 3rd. https://t.co/SuwZAIem2u

He shared the White House press secretary’s response to uncorroborated statements regarding alleged Russian bounties on U.S. troops, which were shared by the news outlet earlier this week.

“For those of you that are always taking the New York Times at their word, they erroneously reported that the president was briefed on this. He was not briefed on this, and neither was the vice president. So, before buying into a full-fledged narrative from the New York Times that falsely stated something about the president, wait for the facts to come out. Note, once again, there’s no consensus in the intel community and, in fact, there are dissenting opinions from some within.” – Kayleigh McEnany, White House Press Secretary

According to the president, the New York Times will lose any remaining credibility on the evening of November the 3rd, the day of the upcoming presidential election.

Darrell Brooks (L) appears at Waukesha County Court on November 23, 2021 in Waukesha, Wisconsin. Brooks is charged with killing five people and injuring nearly 50 after driving through a Christmas parade with his sport […]