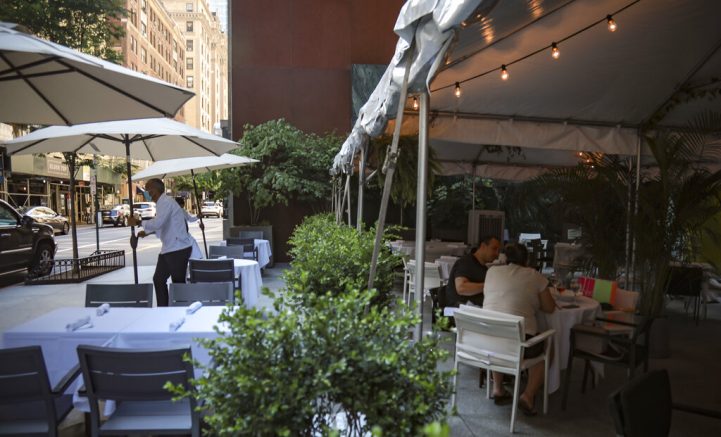 Workers setup additional restaurant tables along the sidewalk for diners at Espiatorio Milos, Wednesday July 1, 2020, in New York. New York City Mayor Bill de Blasio says he is delaying the planned resumption of indoor dining at restaurants in the city out of fear it would ignite a a spike in coronavirus infections. (AP Photo/Bebeto Matthews)

New York City Mayor Bill de Blasio (D) announced restaurants will not be allowed to open for indoor dining as his state eases into phase three of its reopening plan.

De Blasio delivered the news at a press conference Wednesday, backtracking on an earlier plan to allow indoor dining at a limited capacity starting July 6.

The announcement followed Dr. Anthony Fauci’s briefing Tuesday, where he emphasized the risk of case numbers escalating if the country reopens prematurely.

“We see a lot of problems and we particularly see problems resolving around people going back to bars and restaurants indoors,” said de Blasio. “And indoors is the problem more and more, the science is showing up more and more.”

It’s still unclear when indoor dining will resume in the city, but restaurants were allowed to resume outdoor dining late last month.

Sen. Paul says Fauci’s ‘I am the science’ is an expression of ‘extreme arrogance’

OAN NewsroomUPDATED 9:32 AM PT – Friday, January 14, 2022 Sen. Rand Paul accused Dr. Anthony Fauci of abusing his office and says he should be removed from his position. One America’s John Hines has […]

Joe Biden responds to questions about the ongoing U.S. military evacuations of U.S. citizens and vulnerable Afghans, in the East Room of the White House in Washington, D.C., on August 20, 2021. (ANDREW CABALLERO-REYNOLDS/AFP via […]