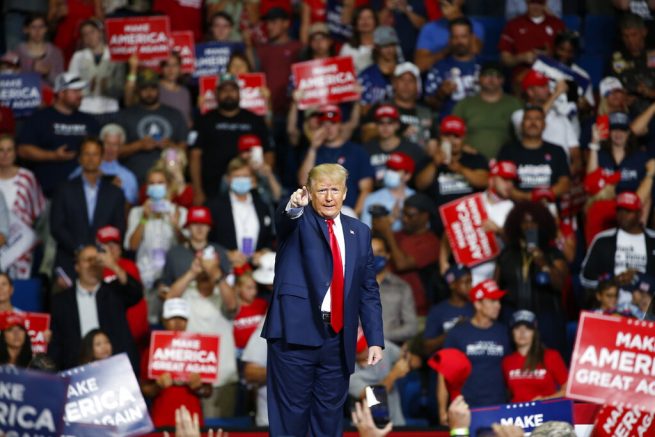 The Trump campaign is reportedly cancelling plans for a rally in Alabama amid the COVID-19 pandemic. According to reports Tuesday, the campaign will no longer be holding a rally in the state next week as intended.

The event would of been held before the Senate primary run off between Tommy Tuberville and Jeff Sessions, which is set to take place July 14. President Trump has endorsed Tuberville against his former attorney general.

BREAKING NEWS: @realDonaldTrump officially endorsed my campaign for U.S. Senate. Help me finish what the President started and fire Jeff Sessions on March 31st. Can you donate $5 today and help us win? #MAGAhttps://t.co/GX6Sb08RQj pic.twitter.com/BelrdP76yN

“Let me urge you in the strongest manner I can to incorporate, use COVID-19 cautions into your daily routine,” stated the Republican governor. “As a reminder what’s in the current order, maintain six foot social distancing…we strongly encourage you to wear a face mask when out in public.”

Police pepper spray protesters, Saturday, July 25, 2020, near Seattle Central Community College in Seattle. A large group of protesters were marching Saturday in Seattle in support of Black Lives Matter and against police brutality […]

The Past and Present of the Chinese Communist Party’s Bellicosity

Commentary In the past two months, the Chinese Communist Party’s (CCP) military threats to neighboring countries and maritime confrontation with the U.S. military entered a new stage, a more dangerous stage, as the Sino-U.S. Cold […]