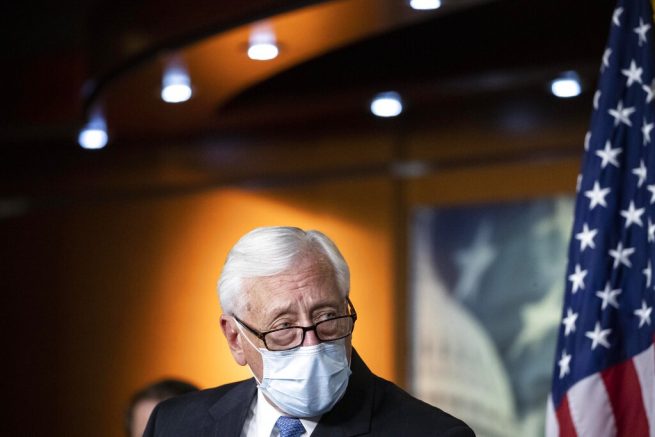 House Majority Leader Steny Hoyer of Md., speaks during a news conference on Capitol Hill, after a meeting at the White House, Tuesday, June 30, 2020 in Washington. (AP Photo/Alex Brandon)

Top Democrats in the House are calling for more direct details from intelligence agencies on the allegations of Russian bounties on U.S. troops.

House Majority Leader Steny Hoyer issued remarks Tuesday, following a White House briefing. He said the Democrats did not receive any new substantive information. Hoyer requested the briefing to find out who knew about the claims and when they found out.

This follows a statement from the Pentagon Monday, which noted there is no evidence that Russian spies have been offering bounties for U.S. troops in Afghanistan.

Trump called reports of Russian bounties on U.S. troops a hoax. Nothing in the White House briefing I attended today led me to believe it is a hoax. I urge the Admin to schedule an all-House briefing with the Intelligence Community immediately. https://t.co/O1NMIpriPz pic.twitter.com/c8i7mAsXII

On Monday, White House Press Secretary Kayleigh McEnany said the intelligence agencies have not come to a consensus on the veracity of the reports and, therefore, the president was never briefed on it.

At least 57 shot in Chicago over Labor Day weekend

Chicago Police Superintendent David O. Brown responds to a question during a news conference Thursday, July 22, 2021, in Chicago. Brown spoke about multiple shootings Wednesday, including the drive-by shooting wounding eight people who had […]

A recent bombing in the Afghan capital of Kabul killed 85 people and injured 147. It is suspected that the Taliban was behind the attack. However, instead of condemning the terrorists, China’s Ministry of Foreign […]

University of Illinois at Chicago (UIC) is going to remove the name John Marshall from the its law school because of the judicial giant’s connection to slavery. According to a press release, the UIC John […]