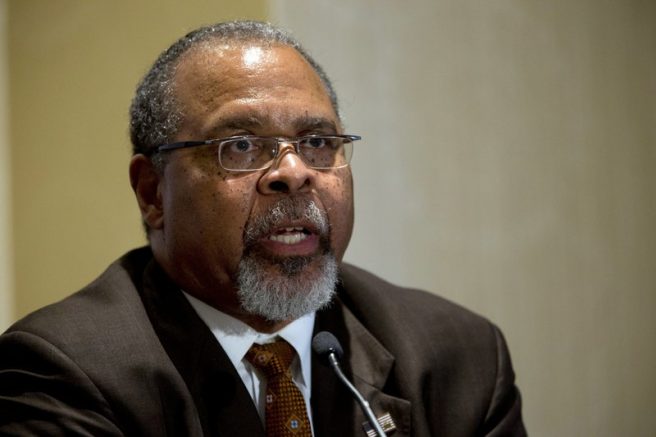 FILE – In this file photo, Ken Blackwell speaks during a news conference after attending a Conversation on America’s Future with Donald Trump and Ben Carson sponsored by United in Purpose, in New York. (AP Photo/Mary Altaffer, File)

In an interview with Breitbart on Monday, Ken Blackwell said Democrats blame the violence in black communities on the “boogeyman of systemic racism.” He claimed Democrats have characterized America as a “racist nation,” which has created a “false narrative.”

Blackwell went on to say the deadly reality is black men and women are being slaughtered in several cities nationwide in numbers that can be compared to war zones in Iraq and Syria. These cities, he claimed, are all run by Democrats.

“You can’t paint safety forces with a broad brush, saying that they are riddled with systemic racism when the facts don’t bear that out,” Blackwell stated. “But what is out by the facts is that these local leaders have found some comfort in the status quo.”

Democrats have betrayed the public trust and made our major American cities less safe! Listen to my interview here with my friend @alexmarlow on Breitbart Radio: https://t.co/LDyjt49w30 @BreitbartNews @realDonaldTrump @GOPChairwoman @TimMurtaugh @BernardKerik @larryelder

This interview came after Blackwell published an article over the weekend in which he claimed Democrats have failed the black community.

Chair of the Freedom Caucus U.S. Andy Biggs (R-Ariz) (3rd left) speaks as caucus members listen during a news conference in front of the U.S. Capitol August 31, 2021 in Washington, D.C. (Photo by Alex […]

Commentary Like Georgia Gov. Brian Kemp, Florida Gov. Ron DeSantis is being pilloried in the mainstream media because he had the audacity to sign a bill that protects election integrity in the Sunshine State. How […]