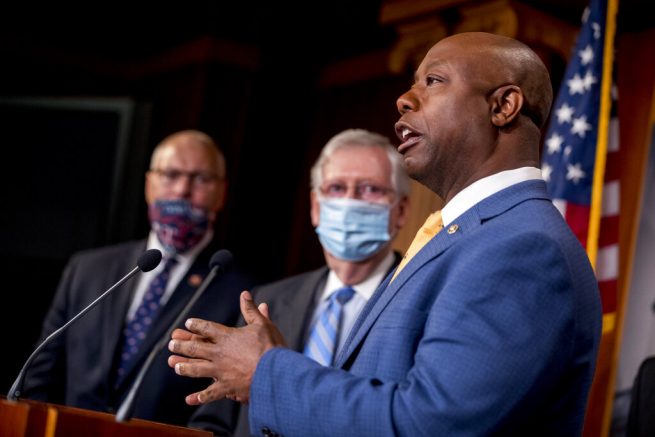 Senate Republicans have introduced a bill on police reform to address national unrest, which stemmed from the killing of African American George Floyd.

“This issue continues and that’s why its so important for us to say that we hear you, we’re listening to your concerns,” said Sen. Tim Scott (R-S.C.) who has spearheaded the legislation.

The bill was introduced Wednesday morning and focused on three major areas. First, it would start by holding officers accountable for their actions by creating a database for violent offenses by law enforcement. The law would also require departments to report all encounters that resulted in injury or death of a person in custody to the FBI.

That database would also help special commissions study the relationship between police and black men to improve the agencies practices. Additionally, it would change department protocols. Officers would no longer be allowed to use chokeholds on suspects and the government would reduce funding for departments who continued to allow the maneuver.

It’s time for Congress to come together to address injustices in our criminal justice system and improve the relationship between communities and law enforcement. Proud to co-sponsor @SenatorTimScott‘s #JUSTICEAct to provide commonsense reforms. #CJReformhttps://t.co/ZoTrW9zJJC

Finally, the bill looks to increase grants for agencies to equip every officer with a body camera. The additional funding would also make more resources like de-escalation training available in hopes of making encounters with officers safer.

“Once we have the information and we can then turn to the training that is necessary to deescalate situation…the duty to intervene…not standing there watching an officer with his knee on the neck, but intervening in these situations…we can train our officers better,” said Scott.

Democrat lawmakers unveiled a more stern version of the bill last week, but Senate Majority Leader Mitch McConnell vowed to kill it upon arrival to the Senate. Instead, he urged Democrats to support the GOP drafted measure, which he said proves the country can support both black Americans and law enforcement.

“Our Democratic friends, if they wanna make a law and not just a point, I hope they will join us in getting on the bill and trying to move forward in the way the Senate moves forward when it tries to actually get an outcome,” Mcconnell stated.

Meanwhile, a vote on Scott’s proposal is set to take place sometime next week.

Jane Fraser, CEO of Citigroup, speaks as White House senior adviser Cedric Richmond listens during a meeting with President Joe Biden and business leaders about the debt limit in the South Court Auditorium on the […]

FILE – In this July 21, 2016, file photo, confetti and balloons fall during celebrations after Republican presidential candidate Donald Trump’s acceptance speech on the final day of the Republican National Convention in Cleveland. (AP […]