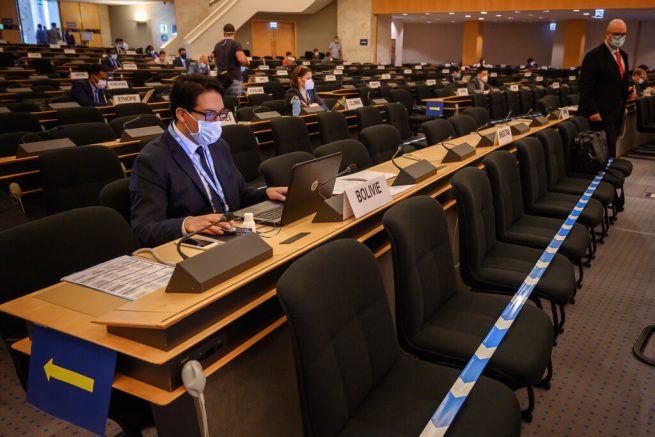 Delegates wearing protective face masks attend the resuming of the UN Human Rights Council session after the break in March over the coronavirus pandemic, on Monday, 15 June 2020, in Geneva. The UN’s top rights body agreed on Monday to a request from African countries to urgently debate racism and police brutality this week following unrest in the US and beyond over George Floyd’s death. (Fabrice Coffrini/Keystone via AP)

The United Nations Human Rights Council is gearing up for a discussion about police brutality and racism in America. According to reports Monday, the conversation will take place Wednesday following a request from from more than 50 African nations.

The announcement came along with a statement signed by the head of the World Health Organization, Tedros Ghebreyesus, who called on the United Nations to “dismantle racist institutions.”

“We got a request from the African group to have an urgent debate in the follow up to what happened in America with George Floyd and the whole tragedy, which showed the problem of racism, of police violence and the follow up to that,” said Elisabeth Tichy Fisslberger, President of the UN Human Rights Council.

In 2018, Africa recorded the highest rate of modern day enslavement in the world, where certain nations refer to it as an institutionalized practice.

RELATED: UN expert says some are ‘starving’ in North Korea