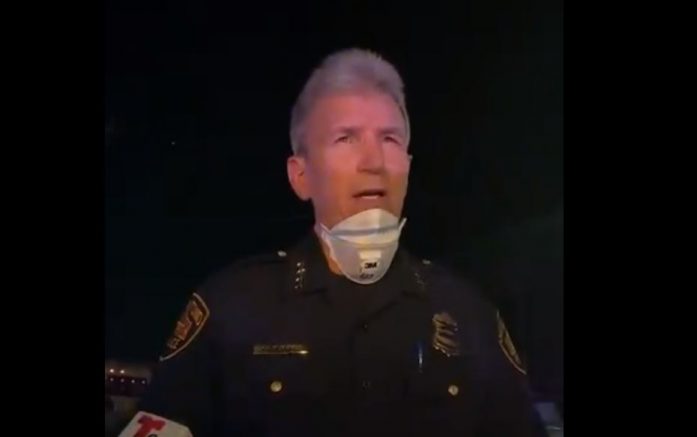 Authorities in Texas are looking for a man on the run after he allegedly fired shots in front of a bar, injuring eight people. San Antonio police responded to calls of shots fired late Friday night.

According to officials, the suspect and his friends were denied entry into the bar because they were intoxicated. After arguing with the bouncer, the suspect went to his car and got a rifle. He then went across the street from the bar, where he fired multiple rounds on people.

The victims ages were said to range from 23 to 41.

“One of the two males said, ‘Don’t you know who I am? I’m a UFC fighter from California.’ He walked back to his car, pulled out a long rifle, and walked back across the street. He opened fire and he hit eight individuals.” – Chief William McManus, San Antonio Police Department

Officials confirmed all the victims are currently in stable condition, with the most serious injury being a gunshot in the back.

Authorities have canvassed the area, looking for surveillance footage, and are still searching for the suspect.

An Atlanta house is crafted in 18th-century style with the help of a design firm that treasures classical architecture These days, it is rare to find a house made of handmade wood mold bricks and […]

A Peaceful Appeal That Made History

NEW YORK—Beijing’s days were always a bit dusty and gray in Zhang Yijie’s memory. That day was no different. A division-head at the Ministry of Foreign Trade and Economic Cooperation, she had just gotten back […]