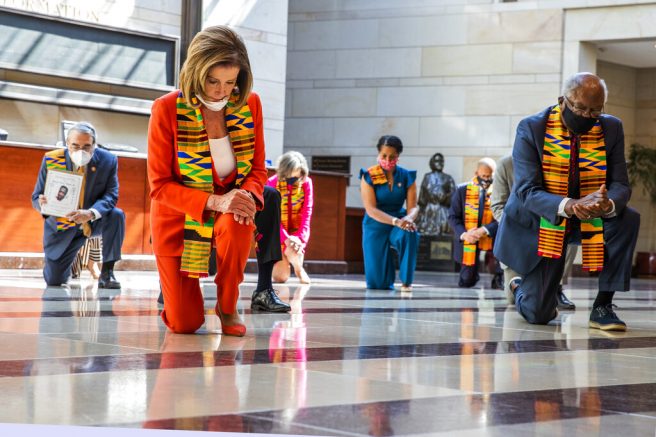 House Speaker Nancy Pelosi of Calif., center, and other members of Congress, kneel and observe a moment of silence at the Capitol’s Emancipation Hall, Monday, June 8, 2020, on Capitol Hill in Washington, reading the names of George Floyd and others killed during police interactions. Democrats proposed a sweeping overhaul of police oversight and procedures Monday. (AP Photo/Manuel Balce Ceneta)

As activists across the country protest for dramatic change in law enforcement following the death of George Floyd, Democrats in the House and Senate introduced a major police reform package.

Democrat lawmakers held a press conference on the reform bill Monday morning. Before going into detail on the legislation, the they held an eight-minute 46-second moment of silence in honor of what George Floyd endured in Minneapolis last month.

The officials then proceeded to introduce the details of their proposed ‘Justice in Policing Act.’ The act aims to address several issues within the justice system such as a lack of accountability, excessive violence and lack of oversight.

Across the country, Americans are calling for action to end police brutality and racial injustice. Today, @HouseDemocrats & @SenateDems are unveiling the #JusticeInPolicing Act. https://t.co/wG7CGJvPoh

Speaker of the House Nancy Pelosi said those who have fallen victim to police brutality serve as martyrs for the cause and lawmakers must seize the opportunity.

The bill includes a national police misconduct registry, which would record and make nationally available any misconduct committed by an officer. Furthermore, it would lower legal standards to pursue criminal charges against police for misconduct.

The Congressional Black Caucus drafted these policies and argue that lack of accountability in policing is a major contributor to excessive policing. Republicans did not participate in the drafting of the legislation and whether they will support it remains unclear.

Although congressional Republicans have not yet committed to supporting the new legislation, Senate Majority Leader Mitch McConnell has condemned racial injustice in law enforcement.

“These disturbing events do not look like three isolated incidents,” he stated. “They look more like the latest chapter in our national struggle to make equal justice and equal protection of the law and the facts of life for all Americans”

Senate Minority Leader Chuck Schumer has called on McConnell to bring the bill to the floor for a vote by the end of this month. Senate Judiciary Committee chairman Lindsey Graham said his committee will hold a hearing on policing practices and law enforcement next week.

The House Judiciary Committee is also holding a similar hearing this week. Democrats in the House are expected to bring the bill up for a vote by the end of the month, although representatives are not scheduled to return to Capitol Hill until June 30.

A Moral Challenge for Democratic Countries

Commentary It has been reported in various media outlets, including The Epoch Times, The Australian, and The Guardian, that Australian Prime Minister Scott Morrison mistakenly referred to the “one country, two systems” framework when discussing […]

The New York Times, The Washington Post, and NBC News have retracted earlier reporting that incorrectly stated former New York Mayor Rudy Giuliani was directly warned by the FBI that he was targeted by a Russian intelligence […]