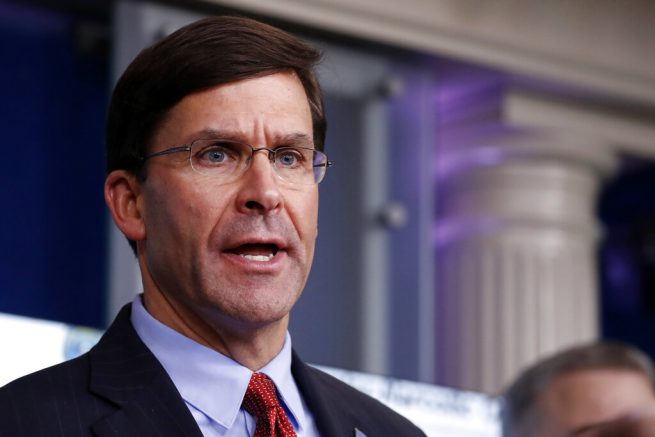 Defense Secretary Mark Esper has voiced his opposition to invoking the Insurrection Act, which would enable him to send military troops to calm down protests nationwide. During Wednesday’s press briefing, Esper stated active duty forces should only be used in a law enforcement role as a matter of last resort and only in the most dire situations.

The defense official reaffirmed the country is not in one of those situations right now and added he does not support using the act.

Secretary @EsperDoD: “I do not support invoking the Insurrection Act.”

He went on to express confidence in the National Guard’s ability to help law enforcement handle the protests.

“I’ve always believed, and continue to believe, that the National Guard is best suited for performing domestic support to civil authorities and these situations, in support of local law enforcement,” stated Esper. “I say this not only as Secretary of Defense, but also as a former soldier and a former member of the National Guard.”

He also confirmed he had directed a probe into the use of National Guard helicopters during Monday’s protests in Washington, D.C.

An encounter with a generous Uber passenger changed driver Latonya Young’s fate, empowering her to realize her dream of graduating from college. Picking up passenger Kevin Esch from a soccer game three years ago in […]

OAN NewsroomUPDATED 8:57 AM PT – Thursday, March 24, 2022 The notion of a coronavirus vaccine mandate continually divides the country as many healthcare workers and members of the military had to decide between a […]

Report: Biden would kill upwards of 159K Jobs in Mich.