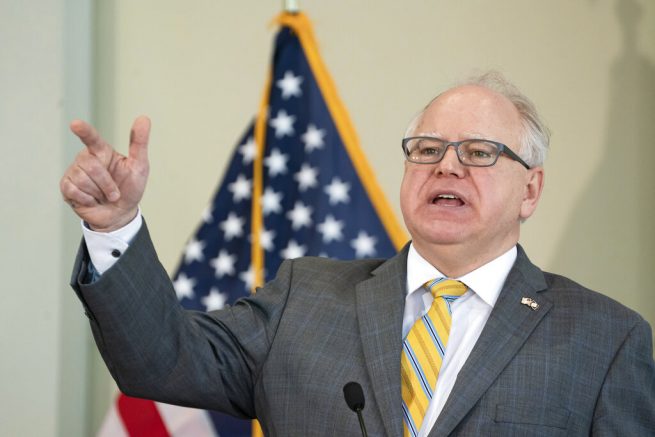 Minnesota Gov. Tim Walz speaks during a news conference Friday, May 29, 2020, St. Paul, Minn., as he talked about the unrest in the wake of the death of George Floyd while he was in custody of Minneapolis police.(Glenn Stubbe/Star Tribune via AP, Pool)

“I thank the President for the support, specifically with Secretary Esper and Chairman of the Joint Chiefs of Staff Milley,” he stated.

On Monday, the governor said the National Guard and ‘Minnesota law enforcement managed to restore order over the past few days and are now building trust among distressed communities. Walz said, however, he’s reluctant to use force against looters and prefers “diplomacy” instead.

“And I also shared with the President that a posture of a force on the ground is both unsustainable militarily, it’s also unsustainable socially because it’s the antithesis of how we live press, so I expressed that on the call.”

Walz added that there was a clear divide between protesters who are expressing their anger in peaceful ways and those who are bent on destruction.

A curfew is set in Minneapolis-Saint Paul from 10pm-4am Monday and Tuesday. Please comply with the curfew to protect yourself and your community. pic.twitter.com/p0z10MF6Fl

Chinese YouTuber Missing After Traveling to China From US, Friends Say

A presenter of a Chinese-language YouTube talkshow has been missing since March 20, after he traveled to China from the United States in early March, according to his friends. Zhou Qiang, presenter of “Zhou Zhou […]

A federal judge in Illinois on Tuesday sentenced a Chinese national to 14 years behind bars for laundering the proceeds of illegal narcotics on behalf of Mexican drug traffickers, according to the Department of Justice […]