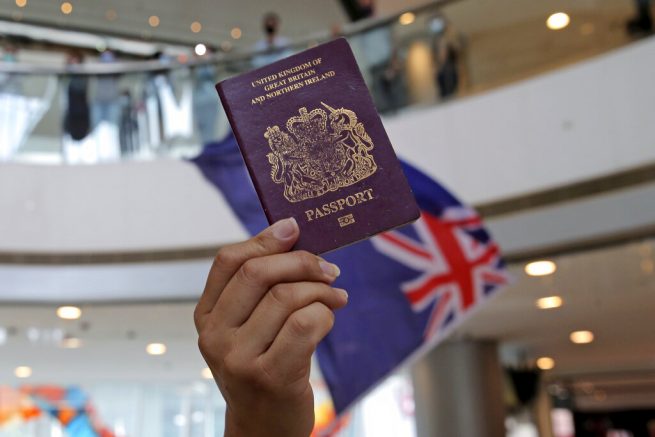 Protesters hold a British National (Overseas) passport and Hong Kong colonial flag in a shopping mall during a protest against China’s national security legislation for the city, in Hong Kong, Friday, May 29, 2020. (AP Photo/Kin Cheung)

It would affect Hong Hong British national passport holders, which is a group of about 300,000 people who lived in the region before it became Chinese territory. Raab said the move would extend visa rights, allowing Hong Kong nationals to stay in the U.K. for longer than six-months.

“If China continues down this path and implements this national security legislation, we will change that status and we will remove that six month limit and allow those BNO passport holders to come to the U.K.,” explained the secretary. “And to apply to work and study for extendable periods of 12 months, and that would itself provide a pathway to future citizenship.”

China’s proposed national security law for Hong Kong is in direct conflict with its obligations under the Joint Declaration. If enacted, this law would violate Hong Kong’s autonomy and freedoms. UK and ???????????????????????? are deeply concerned.
https://t.co/bbGgJgHklw pic.twitter.com/e7eQySFDFX

China claims the move would violate international law and has threatened counter-measures if the U.K. moves forward with the policy.

The Israeli military on Tuesday announced a fresh barrage of strikes targeting the Hamas network of so-called “terror tunnels,” further degrading the group’s ability to launch attacks against Israel. Hidai Zilberman, a spokesperson for the […]