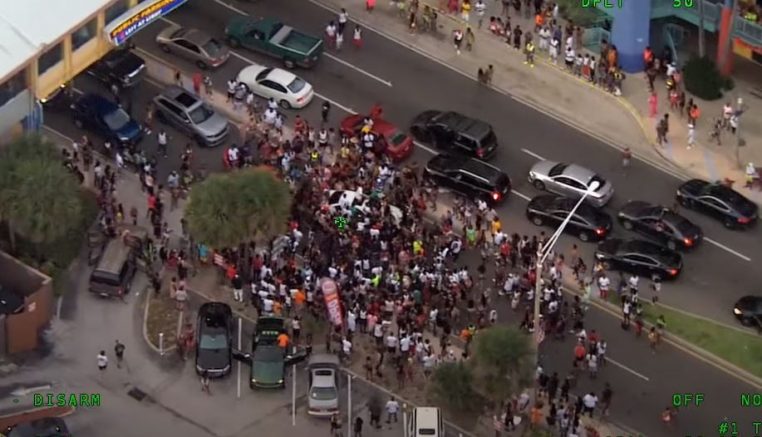 Florida authorities responded to a shooting after massive crowds flooded into Daytona on Memorial Day weekend. According to the Volusia County Sheriff’s Department, a non-fatal shooting took place Saturday evening among a group of more than 200 people.

Officials revealed there were several victims who requiring hospitalization, but all were expected to survive.

The sheriff’s office also released helicopter footage of the scene prior to the incident, which showed some individuals throwing money from their cars.

VIDEO: Some of today’s events (Saturday, 5/23) in Daytona Beach:https://t.co/GimwPWmE1n

Despite the chaos, Sheriff Mike Chitwood called the response to the crowds impressive.

“I was impressed at the way the officers, the deputies and the beach patrol all worked together to have a calming influence on what could have been a really chaotic incident. When you look back after the shooting occurred, not one business was broken into. There was no looting, there was no damage to personal property. Nobody was injured and all of the law enforcement folks involved went home safely.”

This came days after the city’s beaches reopened with restrictions at 50% capacity.

Days after the Texas House passed a landmark bill that would allow permitless carry of handguns, Lt. Gov. Dan Patrick said that there aren’t enough votes in the GOP-led Senate to pass the measure. “If […]