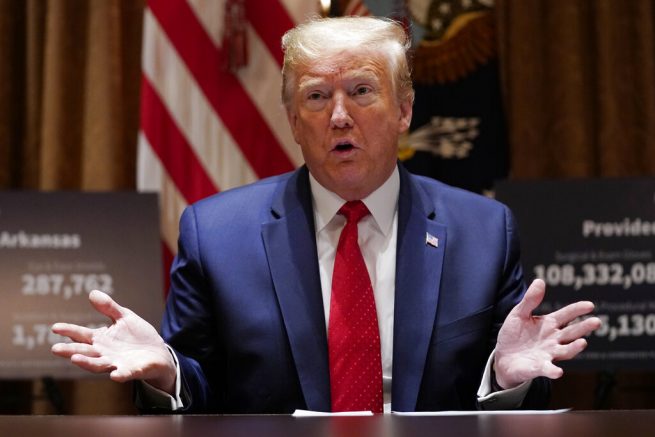 President Donald Trump speaks during a meeting with Arkansas Gov. Asa Hutchinson and Kansas Gov. Laura Kelly in the Cabinet Room of the White House, Wednesday, May 20, 2020, in Washington. (AP Photo/Evan Vucci)

The president has confirmed he will stop taking hydroxychloroquine pills within the next few days. On Wednesday, President Trump said he thinks his regimen will be finished in a day or two.

The White House has not provided details on the dosage or how long he has been taking it. This came after the president told reporters Monday he had started taking the anti-malaria drug as a potential treatment for the coronavirus a couple weeks prior.

Despite backlash, he has defended his decision to take the drug.

“I think it gives you an additional level of safety. You can ask, many doctors are in favor of it. Many front line workers won’t go there unless they have the hydroxy. So this is an individual decision to make.”

The Food and Drug Administration has issued a warning against the use of the drug outside a clinical setting. However, the White House physician stated he believes the possible benefits outweighed its risks.

NEW: A memo from White House physician Dr. Sean Conley lays out the discussion that lead to Pres. Trump taking hydroxy-chloroquine: “We concluded the potential benefit from treatment outweighed the relative risks.” pic.twitter.com/f7qmKzKcxp

RELATED: McEnany: FDA Stands Behind Using Hydroxychloroquine If Prescribed By A Doctor

This handout image shows U.S. Soldiers and Marines assist with security at an Evacuation Control Checkpoint during an evacuation at Hamid Karzai International Airport in Kabul, Afghanistan. . (Photo by Staff Sgt. Victor Mancilla / […]

OAN NewsroomUPDATED 6:17 AM PT – Friday, April 8, 2022 GOP senators say they are hoping to delay the repeal of the Title 42  border policy by the Biden administration. One America’s John Hines has […]

File –  A NYPD officer is pictured. (AP Photo/Mary Altaffer) OAN NewsroomUPDATED 8:01 AM PT – Tuesday, May 11, 2021 The manhunt continues for the suspect in connection with the shooting, which injured three people […]