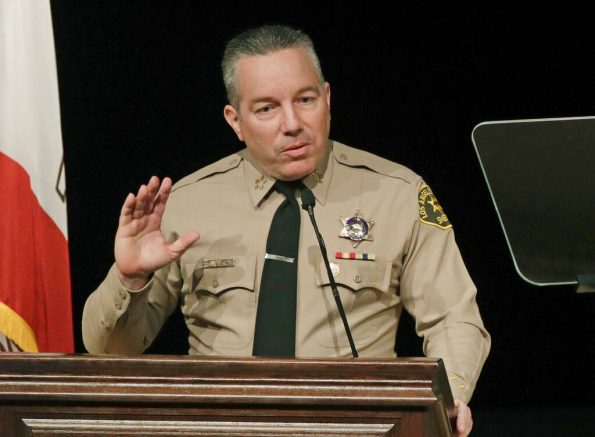 Surveillance footage shows inmates in a Los Angeles County jail trying to contract COVID-19 in an effort to be released.

“Because somehow there was some mistaken belief among the inmate population that if they tested positive, that there was a way to force our hand and somehow release more inmates out of our jail environment and that’s not gonna happen,” said Sheriff Alex Villanueva of the Los Angeles County Sheriff’s Department.

The video shows several inmates in a huddle sharing a bottle of hot water right before getting their temperatures taken. It also shows inmates drinking from the same styrofoam cup then passing around a mask and breathing into it.

“And with the hot water, they’re trying to falsely elevate their temperature readings to generate a symptom for COVID-19,” Sheriff Villanueva continued.

Trying to use COVID19 as a get out of jail free card? Inmates at a Los Angeles County jail tried to infect themselves with the coronavirus by sharing water and a mask.

According to the L.A. Sheriff’s Department, coronavirus cases have increased by nearly 60 percent in just one week at the county jail.

“As a result of this behavior, from this particular module, 21 inmates tested positive for COVID-19 within a week of these videos being taken,” Sheriff Villanueva explained.

As of Monday, 222 prisoners tested positive for the virus and there have been a total of 357 confirmed cases since the start of the pandemic. Nearly 40 percent of the county jail is in quarantine and all new arrivals are being tested upon entry.

A motorist drove into a fuel station to buy fuel at Ojodu Berger district of Lagos, on September 8, 2020. (Photo by PIUS UTOMI EKPEI/AFP via Getty Images) OAN NewsroomUPDATED 11:07 AM PT – Sunday, […]

The Idaho Senate on Monday passed a bill to prevent the teaching of critical race theory in public schools and universities in the Gem State. The bill, H 377 (pdf), was passed largely along party […]