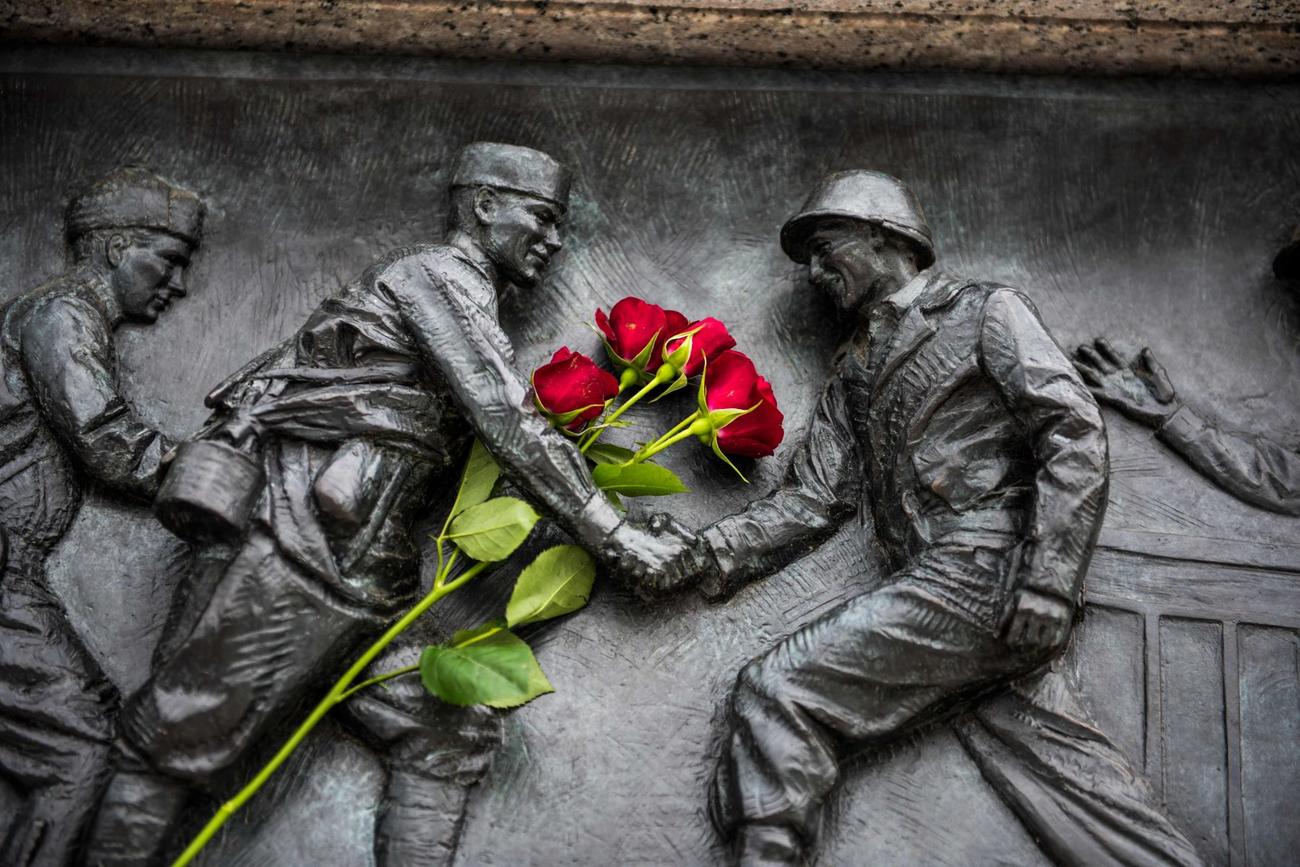 On May 8, 1945, Robert Warren Wolfe, a GI with the 187th Engineer Battalion, had a day off from the mop-up of the broken Nazi war machine.

He wrote home from Germany to his folks in Lima, Ohio, to let them know the big news, in case they hadn’t already heard: “Today is probably one of the greatest days in history — VE Day. We have all looked forward to this day.”

The 75th anniversary of that legendary day was more marked by silence than fanfare as scheduled events were canceled or went virtual because of the coronavirus pandemic.

The president and First Lady each touched the memorial wreath before the pool at the center of the monument to honor the fallen.

Trump saluted and the First Lady placed her hand over her heart as “Taps” was played. The president also stopped to chat briefly with several World War II veterans who came to the ceremony.

In a White House statement to mark the anniversary, Trump paid tribute to those who wore the uniform in World War II and those who contributed on the home front: the “Greatest Generation.”

“Most of these selfless and heroic warriors had never known life in a prosperous America,” he said. “They grew up during the Great Depression, when America’s economic prospects seemed bleak.

“Yet, they answered our country’s call of duty because they believed in the principles that lie at the foundation of our nation,’ Trump continued. “These American heroes would not relent in their noble efforts until they had liberated all of Europe from the abhorrent Nazi regime.”

Steinmeier noted the loneliness of the event because of the pandemic.

“Perhaps this being alone will take us back to May 8, 1945, because at that time the Germans were actually alone — defeated militarily, politically and economically, morally shattered,” he said, according to the Deutsche Welle broadcast agency.. “We had made ourselves the enemy of the whole world.”

May 8, 1945, he said, “was the end of National Socialist tyranny, the end of bombing nights and death marches, the end of unprecedented German crimes and the Holocaust’s breach of civilization.”

That was also the day that 19-year-old Second Subaltern Elizabeth Windsor, a driver and mechanic with the Women’s Auxiliary Territorial Service, ventured out with her sister, Princess Margaret, from Buckingham Palace to join the crowds in London celebrating the end of the war in Europe.

Queen Elizabeth II would later recall to the BBC that she was in uniform and had pulled her cap down nearly over her eyes to avoid being recognized, only to be reprimanded by a Grenadier officer serving as an escort.

He said that he would “refuse to be seen in the company of another officer” in violation of uniform regulations, the queen recalled.

In an address to the nation over the BBC Friday, Queen Elizabeth spoke from behind a desk. To her left, on the desk, was the brown khaki cap she wore during the war.

She noted the empty streets because of the pandemic, in contrast to the crowds she had experienced 75 years ago.

“Today it may seem hard that we cannot mark this special anniversary as we would wish,” she said.

“Instead we remember from our homes and from our doorsteps” the sacrifices made during the war, and those who fell to win a peace, she added. “They risked all so our families and neighborhoods could be safe.”

First Iranian Ship Reaches Venezuela with No Sign of US Threat