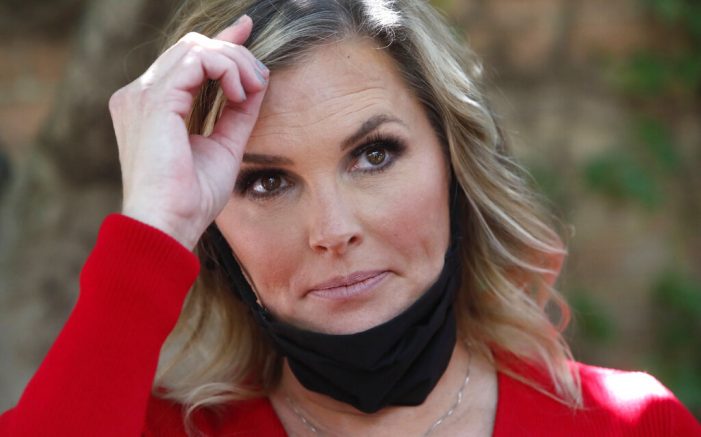 Salon owner Shelley Luther adjusts her hair while listening to a question after she was cited by City of Dallas officials for reopening her Salon A la Mode in Dallas, Friday, April 24, 2020. (AP Photo/LM Otero)

Dallas salon owner Shelley Luther was sentenced to seven days in jail and ordered to pay a $7,000 fine for continuing to operate her business amid the coronavirus pandemic.

A judge ruled Tuesday that Luther defied the state’s stay-at-home order by continuing to operate Salon A La Mode for seven days. The salon is also facing a $500 fine for each of the seven days it was open.

The judge told Luther he would consider waiving her jail time if she admitted that she was wrong, selfish and agreed to close her business.

Judge Eric Moyé asked Luther if she would make a statement admitting she was wrong and selfish. Listen here… pic.twitter.com/6JMukC3v76

However, Luther said she needs to help her stylists support their families and will not close her salon.

“I have to disagree with you sir when you say that I am selfish because feeding my kids is not selfish,” she stated. “I got stylists that are going hungry because they would rather feed their kids, so sir if you think the law is more important than kids getting fed then please go ahead with your decision, but I am not going to shut the salon.”

Luther’s case has sparked outrage across the country with conservative activist groups like the Open Texas Movement throwing its support behind her act of civil disobedience.

Meanwhile, two Texas state representatives received “illegal” haircuts at a salon near Houston on Tuesday and called on Gov. Greg Abbott (R) to reconsider the mandatory closure of businesses. They said “there’s absolutely no reason” some businesses can’t reopen.

Just hours later, Abbott announced some public places, including salons, could begin reopening on Friday. In the meantime, Luther’s lawyer said they plan to “immediately” appeal the court’s decision as many are coming to her defense and are suggesting the governor should intervene in the court’s ruling.

President Joe Biden on Friday sent Congress a $6 trillion budget proposal that would spend big on infrastructure, climate change, and social welfare packages, while creating projected deficits of at least $1.3 trillion per year until 2030. […]

Mexico dedicates $1.5B to border crisis

Medical personnel check in with immigrants after they crossed the Rio Grande into the U.S. on June 21, 2021 in La Joya, Texas. (Photo by Brandon Bell/Getty Images) OAN NEWSROOMUPDATED 7:48 AM PT – Thursday, […]