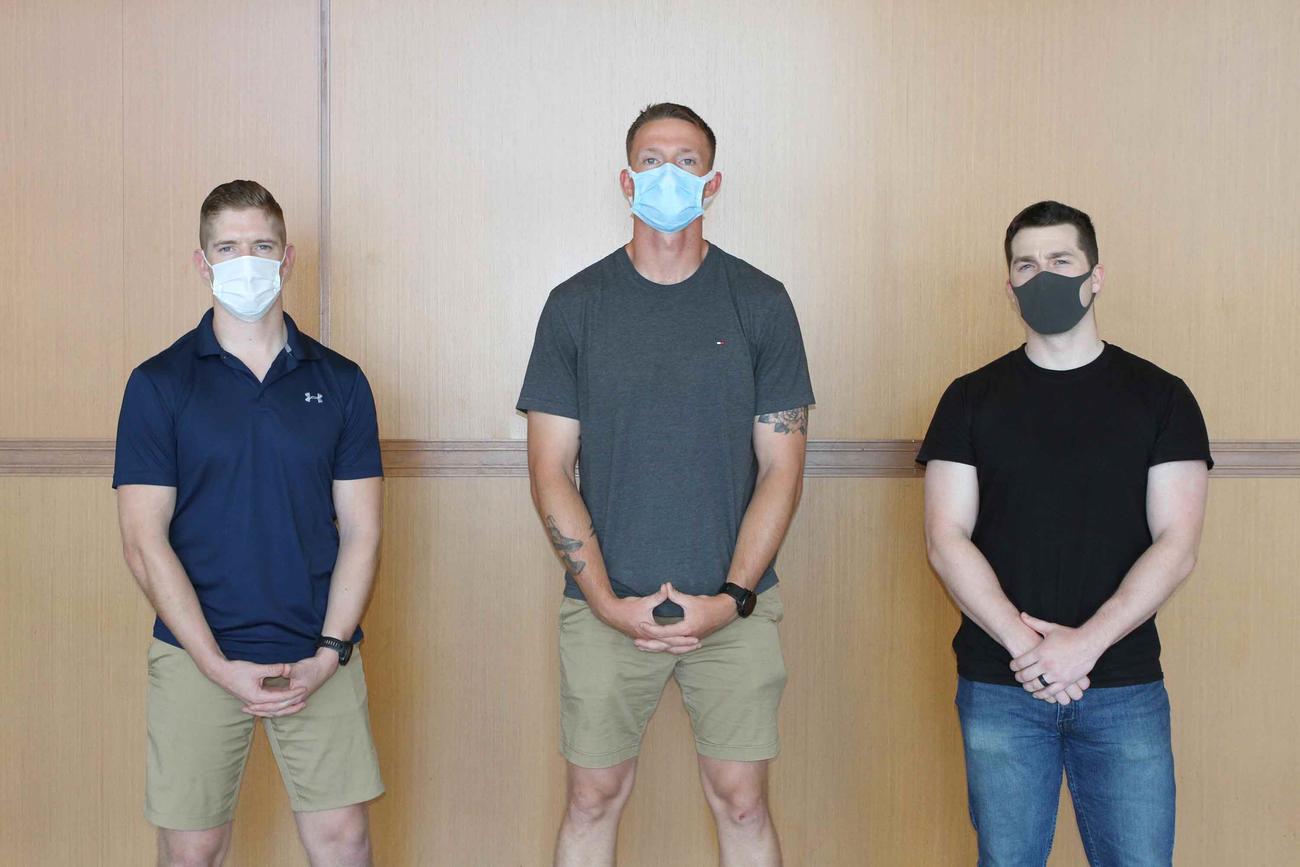 Three Marines who sprang into action to restrain a hostile and disruptive fellow passenger are now being recognized by their unit commanding officer for their bravery and quick thinking.

The incident happened Monday on a flight from Tokyo to Dallas/Fort Worth International Airport in Texas. The three North Carolina-based Marines, all assigned to 1st Battalion, 6th Marine Regiment, were Capt. Daniel Kult, Sgt. John Dietrick and Pfc. Alexander Meinhardt. They had been traveling back to the U.S. for various reasons, about halfway through a six-month Unit Deployment Program pump in Okinawa.

During the flight, according to a Marine Corps news release, a passenger barricaded himself inside one of the plane’s bathrooms and loudly began to make what officials described as threatening comments.

“While watching a movie during my flight from Japan to Texas, I started to hear screaming coming from the restroom on board,” Dietrick, an infantry assault section leader from Mechanicsville, Virginia, said in a statement. “When I took off my headphones, I heard a man sounding very distraught and screaming from the bathroom.”

The Marines then moved quickly, according to the release. While a flight attendant got the door unlocked, the three men grabbed the passenger and used flex ties to bind him. They took him back to a seat and stayed with him to make sure he remained restrained for the rest of the flight.

“I knew I had to step in when he became a danger to others and himself,” said Meinhardt, a mortarman from Sparta, Wisconsin. “I didn’t think twice about helping restrain him through the rest of the flight.”

“We just assessed the situation and acted,” he said. “Working with the flight crew, we got the door open and from there worked together to subdue him. We didn’t take time to talk it over. We just got ready and did what we needed to help.”

In light of the episode, the plane was rerouted to the Los Angeles International Airport. The problem passenger was disembarked and sent to a mental health facility for evaluation, according to the release. The incident will be investigated by the FBI and the U.S. Attorney’s Office for the Central District of California, officials said.

Of the bravery of the three Marines, their battalion commanding officer simply said he was not surprised.

“I happen to know all three of them, two of them well, and they are all what I would call ‘men of action,'” Lt. Col. Chris Niedziocha, commander of 1/6, said in a statement. “I’m continually amazed by and grateful for the people we have in this battalion.”

It’s not the first time U.S. service members in transit have jumped into action to prevent a disaster. Perhaps most famously, a soldier and an airman traveling on a train in France in 2015 helped to avert a terror attack — and were eventually awarded honorary French citizenship in thanks for their efforts.

Read more: Soldiers’ GoFundMe Campaigns May Get Them in Legal Trouble, Army Warns

Despite her frequent criticism of the F-35 Joint Strike Fighter, Sen. Martha McSally doesn’t actually hate the aircraft. “I love the F-35! We need the F-35!” the Republican senator from Arizona said during an interview […]

The Royal Australian Air Force has its first Boeing-built drone-jet hybrid prototype, which will use artificial intelligence to conduct intelligence, surveillance and reconnaissance missions to supply fighter pilots with more information during a conflict. The […]