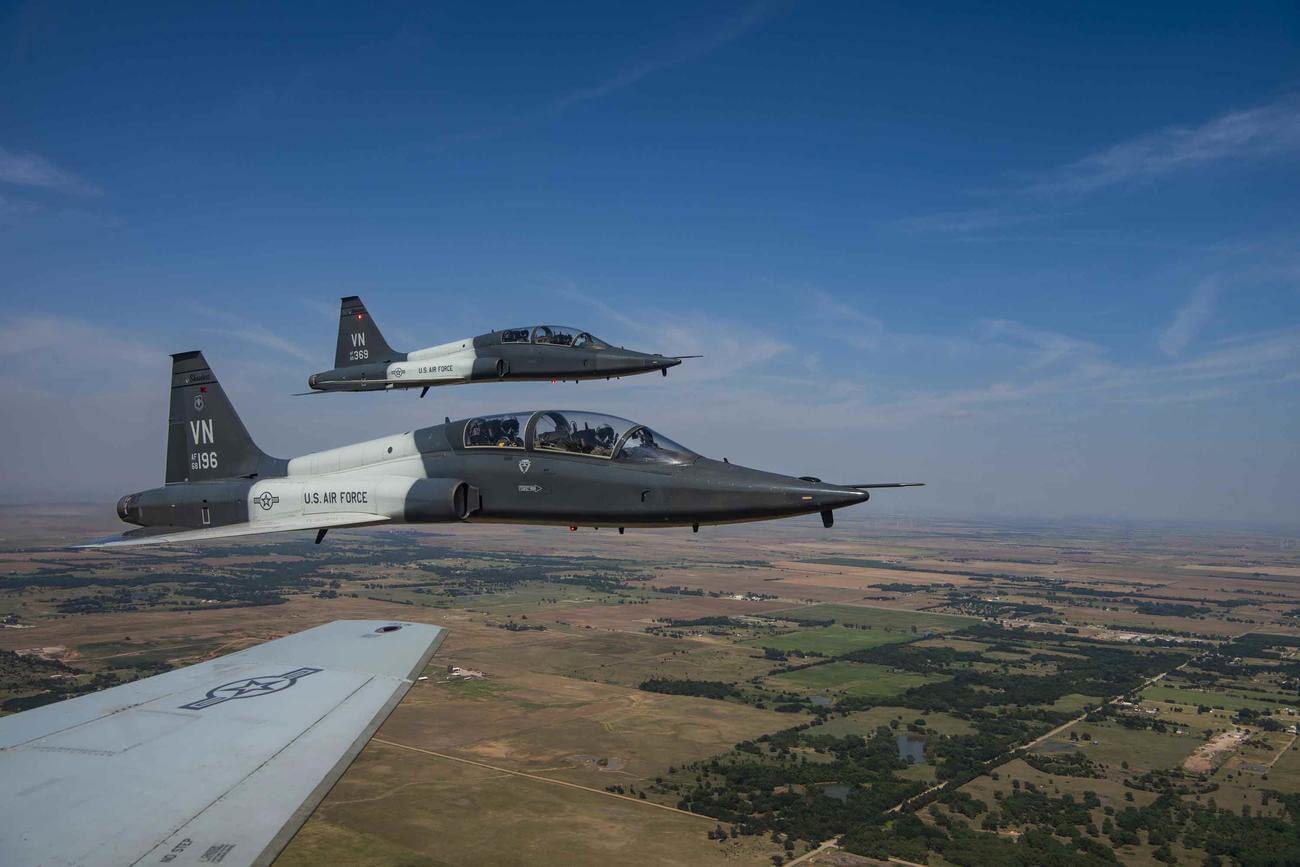 A T-38 Talon instructor pilot failed to take control of the aircraft when his student prematurely used a braking maneuver after touching down, causing the jet to collide with another aircraft, roll over and skid to a halt, killing both pilots, according to an Accident Investigation Board report.

The two men had just completed a training flight with another T-38 Talon instructor-student pilot team; then, both aircraft headed back to base for a formation landing. Kincade and Wilkie flew the left wing position, while the second T-38 flew on the right.

Officials noted that the early morning low cloud cover steadily lifted, and the operation’s supervisor allowed the T-38s to alter their flight status “from instrument recoveries-only to a visual recovery-permissible status of ‘Restricted Pattern — Straight-In Only'” when coming in for the landing, according to the report.

Shortly after 9 a.m. local time, Kincade and Wilkie, flying tail number 65-0395, briefly became airborne again after the initial touchdown. In the front seat, Wilkie “prematurely initiated an aerobrake, causing [mishap aircraft 1] to lift back into the air after landing,” the report states.

Once an aircraft slows below flying airspeed after touching down, the pilot “will raise the nose to enter an aerodynamic braking maneuver” to block airflow and create drag, which slows the plane “to a speed at which the pilot can safely employ mechanical brakes,” the Air Force said.

In this case, Wilkie’s early use of the aerobraking maneuver caused the T-38 to bounce back up and lose contact with the runway surface, officials said. It was Wilkie’s 56th training sortie.

“At the same time, [Wilkie] applied the right rudder to steer the aircraft away from the left edge of the runway,” the report states. “The student’s use of the rudder under these conditions — airborne, configured for landing and at an increased angle of attack — caused the aircraft to roll and yaw to the right and placed it on a collision course with the second T-38.”

Because of the delay between rudder application and noticeable aircraft response to the maneuver, the board report, headed by Brig. Gen. Evan Pettus, found that “[Kincade] was unaware of [Wilkie’s] rudder input until after the onset of the rapid right roll.”

As the T-38 lifted off the runway and crossed into the other T-38’s path, it struck the second jet with its right main landing gear, followed by its right wing. The pilots in the second aircraft were not injured in the accident.

However, Pettus found that a collision with the second T-38 “was inevitable.”

“By a preponderance of the evidence, the causes of the mishap were [Kincade] failing to take control of [the aircraft] as a precarious situation developed and [Wilkie] subsequently making an inappropriate flight control input,” he said.

Pettus added that Wilkie “lacked an effective visual scan during the formation approach,” substantially contributing to the accident.

“Due to his focus on [mishap aircraft 2], [Wilkie] did not adequately cross-check his runway alignment prior to touchdown. Instead, he used rudder in an attempt to steer [his aircraft] as his premature aerobrake lifted the weight from [mishap aircraft 1’s] wheels after [it] initially touched down,” Pettus said.

In a statement to Air Force Magazine, Wilkie’s family said more research into the accident should have been conducted, finding the report “grossly and unjustly incomplete.”

The family added that tandem landings in a 1960s-era trainer are unnecessary and dangerous.

The formation landing has “no continuing practical benefit to combat pilot proficiency or survivability,” they said, according to the magazine.

“Although it is the instructor’s mandate to keep a student pilot safe, it should not be his or her job to ensure preservation of life during an exceedingly unsafe maneuver in an exceedingly tired old plane in which minor student errors occurring in hundredths of a second cannot be corrected quickly enough by the instructor,” they said. “We don’t think the Air Force is doing right by our Airmen and Airwomen by mandating student pilots land in formation in a plane so old that it doesn’t perform as responsively as needed to prevent loss of life.”

Nearly 200 pilots have chosen to stay in the U.S. Air Force as major airlines operate in a limited capacity during the COVID-19 outbreak, sharply reducing the number of commercial flights around the world. While […]