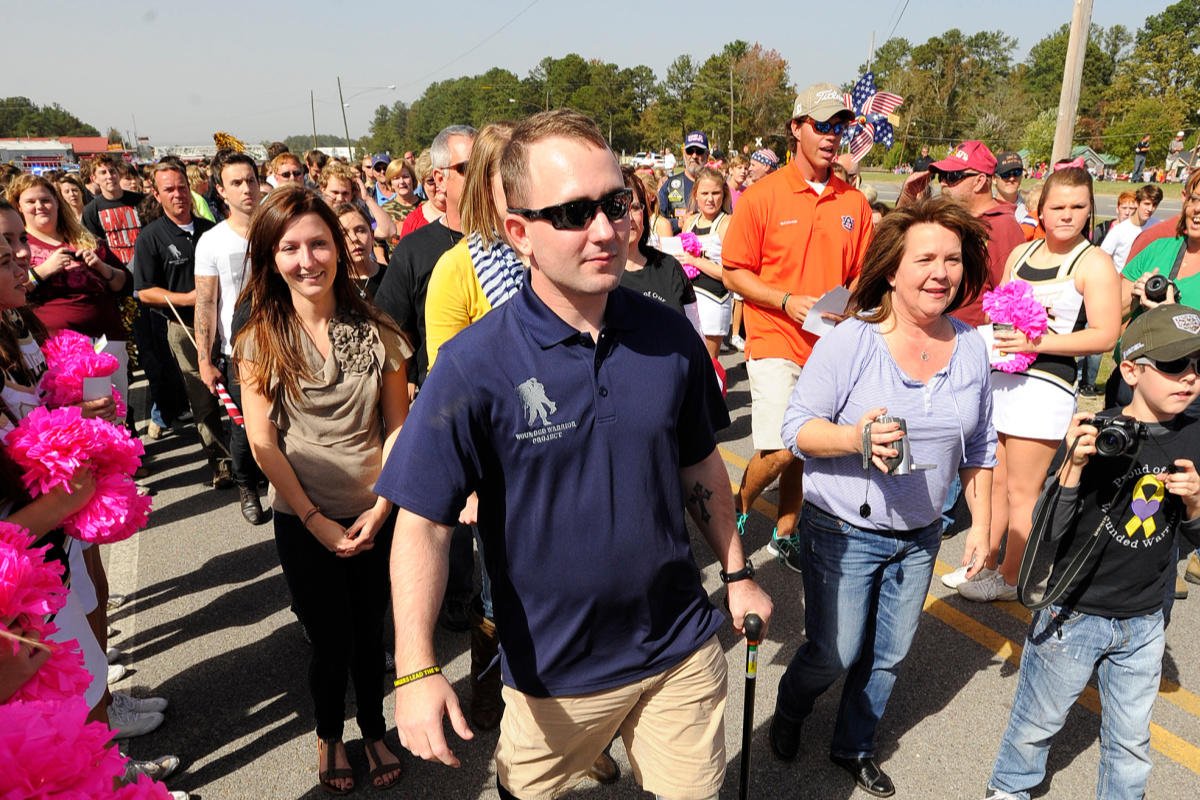 AUBURN, Ga. (AP) — Josh Wetzel had toyed around with joining the military in the past.

The Glencoe, Alabama, native has deep family ties to the armed forces: His father served in the U.S. Army during Operation Desert Storm. Five of his uncles and two of his grandfathers served in the military.

But Wetzel fought against joining the military for “a long time,” he said over the phone recently. But after stints playing baseball for Young Harris College and Gadsden State, Wetzel discovered that school wasn’t really for him. After transferring to the University of North Alabama and falling behind in his studies, he decided to drop out and join the Army in January 2010.

“I’d just flunked out of school,” Wetzel said. “I knew that I needed to do something with my life. … It was time for me to get serious with my life and do something. So, the Army was it.”

He called his wife Paige Wetzel, currently the director of operations for the Auburn volleyball team, when he made the decision, then headed straight to the Army’s recruitment office. His only deployment was to Afghanistan.

Wetzel doesn’t mind going into detail. He remembers “pretty much” the entire thing.

On May 31, 2012, Wetzel and his weapons squad in the 1-23rd IN, 2nd Infantry Division were on day three of a week long mission. It was 115 degrees outside, and the platoon moved slowly and carefully. The group could see their end goal off in the distance.

The biggest threat in Afghanistan, according to Josh, were IEDs, pressure plate devices typically made out of metal. The group moved “like ducks in a row” behind a metal detector, carried by an individual in the front. In this case, that was Josh.

The group moved past a dirt road, through a field and arrived at a wall. Josh cleared part of the area, then stepped to the other side of the wall — and onto a carbon-rod IED, which had no metal content.

The blast launched Josh seven feet into the air. He remembers flipping and landing on the ground.

As soon as he hit the ground, he knew what had happened. He didn’t even have to look.

“I knew my legs were gone at that point,” Josh said.

The blast took both legs, broke both arms and caused a C4 break in his neck.

The medic treating him, who was also his best friend, was shaken up. Josh needed to calm him down, so he used humor to diffuse the situation.

“As soon as he got to me, my first question was, ‘woah, did you see that sick flip?’” Josh said.

He talked about getting running blades similar to those used by Olympic sprinter Oscar Pistorius, and hosting a barbecue cookout when the rest of the group returned to the U.S.

When Josh was loaded onto a helicopter following the incident, he asked the pilots not to strap in his right arm. He wanted to give the “thumbs up,” like football players do when they get carted off the field.

Josh didn’t arrive back in the U.S. until June 7.

He and Paige “don’t take things too seriously” in their relationship, he said, but when Josh laid eyes on his wife at Walter Reed Army Medical Center, he broke down into tears.

“What’s wrong?” Paige asked when she saw her husband.

“Well, we know where they’re at,” Paige answered. “We’re just not going to go back and get ’em.”

They both started laughing. That set the tone for Josh’s recovery, which included nearly two years at Walter Reed.

Paige, along with Josh’s mother, stayed with him at the hospital “at all times.” Paige motivated him during his recovery and rehab. Former President Barack Obama was pictured praying with the couple, in a hospital room decorated with Auburn posters.

“She knew how to push me and drive me towards getting healthy,” Josh said.

From the Front Lines to Baselines

Josh medically retired from the Army in August 2014, one year after he and Paige welcomed a baby girl, Harper.

Paige coached volleyball at Point University in 2014, and Josh volunteered at the college’s sports information department for Austin Penny, who now serves as Auburn football’s director of content strategy. He interned in the communications department at Auburn a year later, serving as the main media contact for women’s tennis.

The couple received a specially adapted home from Homes For Our Troops, an organization that builds mortgage-free, adapted houses for severely injured veterans, in June 2016.

“I tell people all the time, one reason I liked the Army so much is because I became my best ‘me’ when the bullets were flying,” Josh said. “I worked really, really well under pressure. And the more pressure, the better.”

The pressure of running Auburn basketball’s social media during the Tigers’ Final Four run last year may not compare to combat in the middle east, but heading a recognizable brand such as Auburn’s provides a “big puzzle” for Josh and the Auburn sports communications staff to solve each day.

“Honestly, it was kind of all a blur,” Josh said. “We didn’t honestly expect to make it that far, but we were prepared. And we did it.”

This article was written by JOSHUA MIXON, The Ledger-Enquirer from The Associated Press and was legally licensed through the NewsCred publisher network. Please direct all licensing questions to legal@newscred.com.

The Air Force recently proved through a series of tests that its KC-135 Stratotanker aircraft can fly more efficiently just by mounting the cockpit window’s wiper blades vertically instead of horizontally. The potential fuel cost […]