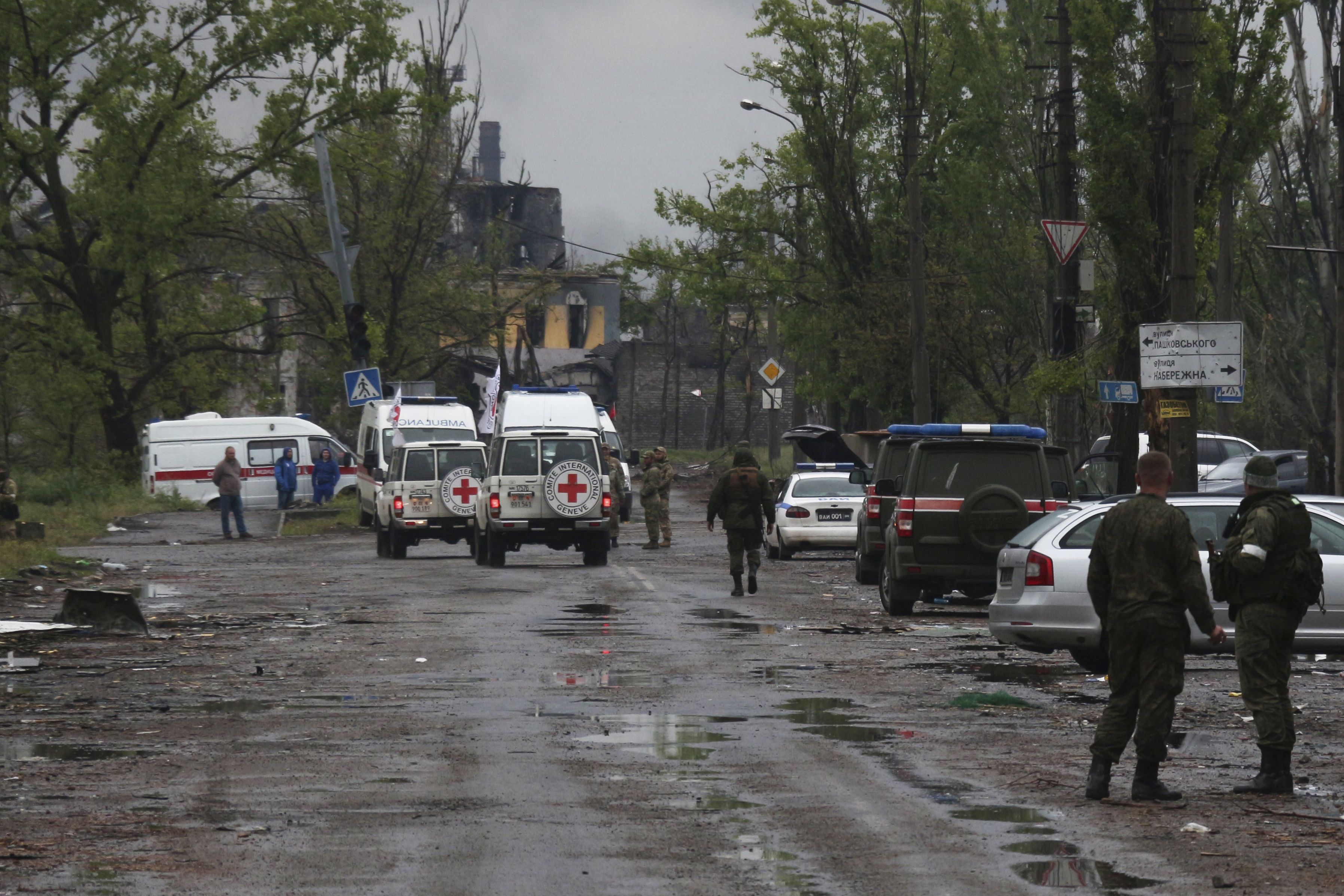 KYIV, Ukraine (AP) — Hundreds more fighters have emerged from the Mariupol stronghold where they made their last stand and surrendered, Russia said Thursday, and the Red Cross worked to register them and their comrades as prisoners of war, as the end of a key battle in the conflict drew closer.

Meanwhile, in the first war crimes trial held by Ukraine, a captured Russian soldier testified that he shot an unarmed Ukrainian civilian in the head on his officer’s orders and asked the victim’s widow to forgive him.

A monthslong siege of Mariupol that left it in ruins and the drama of last-ditch fighters at a steel plant holding off Russian forces turned the strategic port city into a worldwide symbol of suffering and defiance. With Ukraine saying their mission is complete, the fighters have been told to save their lives — and international attention is focused on how they will be treated.

The Russian military said that a total of 1,730 Ukrainian troops at the Azovstal steelworks have surrendered since Monday. At least some were taken by the Russians to a former penal colony in territory controlled by Moscow-backed separatists, and a separatist official said that those who needed medical assistance were hospitalized.

The International Committee of the Red Cross said that it has registered hundreds of prisoners of war from the plant, starting Tuesday, under an agreement between Russia and Ukraine. But the Geneva-based humanitarian agency, part of whose mission is to help ensure the rights of prisoners of war, has not said whether it has visited them.

While Ukraine said it hopes to get the soldiers back in a prisoner swap, Russia has threatened to investigate some for war crimes.

It’s not clear how many fighters are now left in the warren of underground tunnels and bunkers at the plant. Russia previously estimated that it had been battling some 2,000 troops in the waterside site.

The emptying of the plant would allow Russia to claim complete control of Mariupol, a long-sought victory but one that holds largely symbolic importance at this point since the city is already effectively under Moscow’s control and military analysts say most of the Russian forces that were tied down by the drawn-out fighting have already left.

Still, it would be a clear win in a war that has seen Moscow suffer a series of setbacks in the face of stiffer than expected Ukrainian resistance. Kyiv’s troops, bolstered by Western weapons, thwarted Russia’s initial goal of taking the capital and have since bogged them down in the Donbas, the eastern region that President Vladimir Putin now has his sights on.

The surprising success of Ukraine’s troops in the face of a larger and better armed force has buoyed Kyiv’s confidence, and a senior official reflected that Thursday.

Mykhailo Podolyak, an adviser to Ukrainian President Volodymyr Zelenskyy who was involved in several rounds of talks with Russia, said in a tweet addressed to Moscow: “Do not offer us a cease-fire — this is impossible without total Russian troops withdrawal.”

“Until Russia is ready to fully liberate occupied territories, our negotiating team is weapons, sanctions and money,” he wrote.

With his troops making only slow progress on the battlefield, Putin has also lost ground on the diplomatic front. Sweden and Finland recently abandoned generations of being militarily nonaligned and asked to join NATO, fearing that Russia might not stop with Ukraine.

But their accession to the Western military alliance has run into trouble because of objections from Turkey. Turkish President Recep Tayyip Erdogan reiterated his opposition on Thursday to the Nordic nations’ joining. Each of NATO’s 30 countries has an effective veto over new members.

On the battlefield, Ukraine’s military said in its morning briefing Thursday that Russian forces pressed their offensive in various sections of the front in the Donbas, but were being successfully repelled. The governor of the Luhank region said Russian shelling killed four civilians, while separatist authorities in Donetsk said Ukrainian shelling killed two.

On the Russian side of the border, the governor of Kursk province said a truck driver was killed by shelling from Ukraine.

In the war crimes trial in Kyiv, Sgt. Vadim Shishimarin, a 21-year-old member of a Russian tank unit, told the court that he shot Oleksandr Shelipov, a 62-year-old Ukrainian civilian, in the head on an officer’s orders.

Shishimarin, who pleaded guilty as the trial opened a day earlier, said he disobeyed a first order but felt he had no choice but to follow the order when it was repeated by another officer. He said he was told the man could pinpoint their location to Ukrainian forces.

A prosecutor has disputed that Shishimarin was acting under orders, saying the direction didn’t come from a direct commander.

Even though Shishimarin pleaded guilty, prosecutors will present the evidence against him in line with Ukrainian law.

Shishimarin apologized to the victim’s widow, Kateryna Shelipova, who described seeing her husband being shot dead just outside their home in the early days of Russia’s invasion.

She told the court that she believed Shishimarin deserves a life sentence, the maximum possible, but that she wouldn’t mind if he were exchanged as part of a possible swap for the Ukrainian defenders of the Azovstal steel plant in Mariupol.

Mariupol was a target of the Russians from the outset as Moscow sought to open a land corridor from its territory to the Crimean Peninsula, which it seized from Ukraine in 2014 — but the city’s defenders grimly clung to the steel mill, preventing Russia from completing its occupation of the city.

The city — its prewar population of about 430,000 now reduced by about three-quarters — has largely been reduced to rubble by relentless bombardment, and Ukraine says over 20,000 civilians have been killed there.

The U.S. has gathered intelligence that shows some Russian officials have become concerned that Kremlin forces in Mariupol are carrying out abuses, including beating city officials, subjecting them to electric shocks and robbing homes, according to a U.S official familiar with the findings.

The Russian officials are concerned that the abuses will further inspire residents to resist the occupation and that the treatment runs counter to Russia’s claims that its military has liberated Russian speakers, who make up the majority of people in the Donbas, according to the official, who was not authorized to comment.

International attention is also focused on how Russia treats the fighters surrendering at Mariupol. Amnesty International had pushed for the Red Cross to be given access to the troops. Denis Krivosheev, Amnesty’s deputy director for the region, cited killings allegedly carried out by Russian forces in Ukraine and said the Azovstal defenders “must not meet the same fate.”

The Red Cross did not specify how many prisoners of war it had registered from the Mariupol steel plant but said they numbered in the hundreds. It said the process included getting basic personal details from the soldiers that would help the organization keep in touch with their relatives.

It said its team did not transport the fighters to “the places where they are held.”

The Red Cross is a kind of guardian of the Geneva Conventions, a body of international law that aims to ensure the humane treatment of civilians, prisoners of war and other non-combatants during conflict. And the organization noted that, under those conventions, it should be allowed to interview prisoners of war “without witnesses” and that visits with them should not be “unduly restricted.”

Denis Pushilin, the leader of the self-proclaimed Russia-backed separatist government in Donetsk, a region that includes Mariupol, said that Red Cross representatives were allowed to inspect the detention facility, but that could not be immediately verified.

McQuillan reported from Lviv. Associated Press journalists Yuras Karmanau in Lviv, Andrea Rosa in Kharkiv, and Aamer Madhani in Washington and other AP staffers around the world contributed.