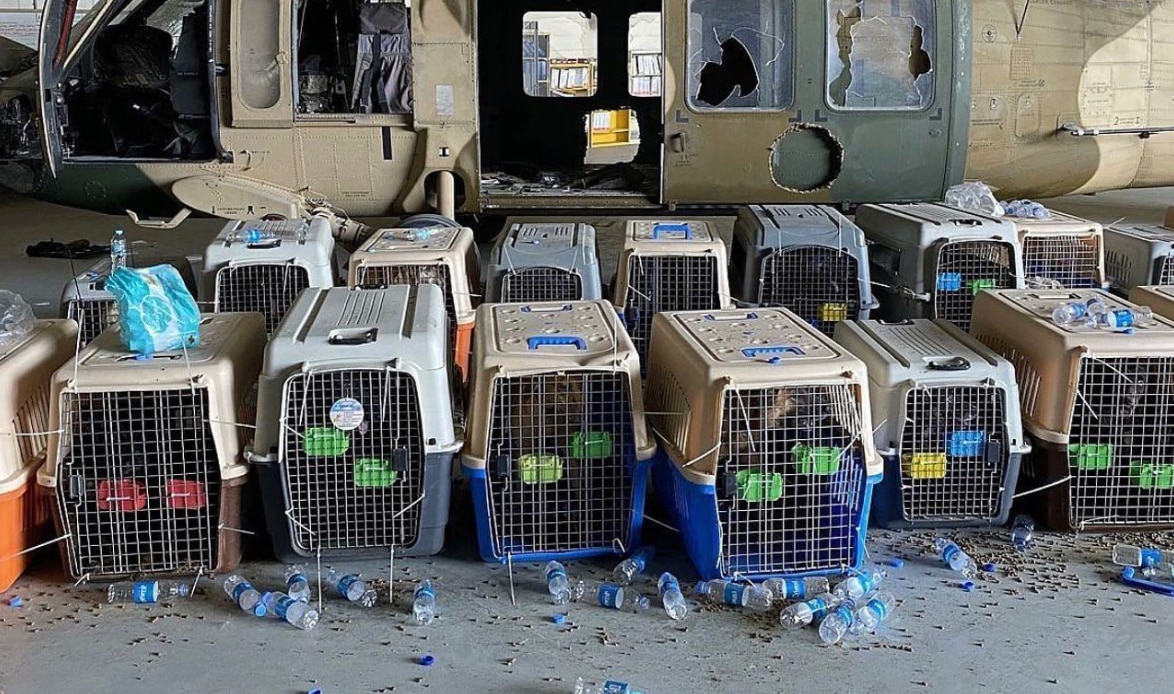 The Pentagon is pushing back after a widely-circulated photo of caged working dogs in an aircraft hangar at Hamid Karzai International Airport led social media purveyors to believe that the U.S. left behind military working dogs.

The Pentagon said no military working dogs were left in Afghanistan as American troops withdrew from Afghanistan on Aug. 31.

“To correct erroneous reports, the US military did not leave any dogs at Hamid Karzai International Airport, to include the reported ‘military working dogs,’ Eric Pahon, a Defense Department spokesman, wrote in an email to Military Times.

The Defense Department is stressing that while people were the primary focus in the evacuation effort, the U.S. government made it a priority to ensure its working dogs returned home, Pahon said.

“We invest hundreds of thousands of dollars into these dogs,” Pahon said. “We wouldn’t leave them behind.”

An earlier statement put out by the American Humane Society said that the dogs left at the airport are military contract dogs, belonging to private contracting companies.

“I am devastated by reports that the American government is pulling out of Kabul and leaving behind brave U.S. military contract working dogs to be tortured and killed at the hand of our enemies,” wrote Dr. Robin R. Ganzert, president and CEO of American Humane. “These brave dogs do the same dangerous, lifesaving work as our military working dogs, and deserved a far better fate than the one to which they have been condemned.”

A volunteer organization called Kabul Small Animal Rescue (KSAR) has representatives on the ground in Afghanistan working to save the stranded contract dogs in Kabul, Pahon said.

Though KSAR raised funds to secure a charter flight to take the dogs to safety, no plane ever touched down.

Pahon estimated that there are around 150 contract dogs left on the ground.

One of the contracting companies identified as having dogs on the ground is GardaWorld. Though it did not specify the number of dogs GardaWorld has in Kabul, its media relations team said that it is working with KSAR to bring them all home safely.

“Our team has worked relentlessly with numerous dedicated charities to rescue our dogs and all the animals under KSAR’s care,” the team said in a statement to Military Times. “We have no intention of giving up on our dogs, despite the gruelling setbacks, and we will continue to work with a growing and dedicated team to evacuate all our dogs.”

Kabul Small Animal Rescue did not immediately respond to a request for comment.

[This article is being updated as new information becomes available.]

Sarah Sicard is a Senior Editor with Military Times. She previously served as the Digital Editor of Military Times and the Army Times Editor. Other work can be found at National Defense Magazine, Task & Purpose, and Defense News.