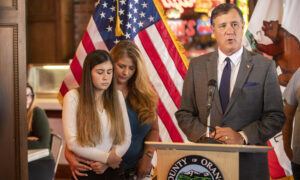 LOS ANGELES—Authorities have identified the suspects’ vehicle involved in a road rage incident on the 55 Freeway in Orange last week in which a 6-year-old boy was fatally shot.

California Highway Patrol posted a picture on Twitter showing a white Volkswagen Golf SportWagen on the freeway. A woman is suspected of driving the vehicle, authorities said, and a man sitting in the passenger seat is believed to have fired the shot that killed Aiden Leos.

Anyone with possible information about the shooting should contact California Highway Patrol at (714) 567-6000 or visit www.aiden-reward.com.

Your Assistance Is Needed!
If you or anyone you know has information regarding the identity of the suspect and/or vehicle, we urge you to contact the @chp_santa_ana area office at (714)567-6000 or email santaanachptipline@chp.ca.gov with information. #justice #help pic.twitter.com/0AtfkSzQb1

A reward for information leading to the suspects’ arrest and conviction has grown to $320,000, according to Orange County Supervisor Don Wagner’s office. Money for the reward came pouring in from Wagner’s office, Supervisor Katrina Foley, Orange County business owners and anonymous donors after the family put up the first $50,000 last Sunday.

“We will do everything in our power to seek justice,” Orange County District Attorney Todd Spitzer said at a news conference Thursday. “The natural order of a parent—and I’m a parent too—is not to have your child predecease you. That’s not the order of the world. We’re supposed to bury our parents, we’re not supposed to bury our children.”

Aiden’s mother was traveling north on the 55 Freeway May 21 around 8 a.m. when her son was fatally shot from the back while sitting in his booster seat.

The mother told Reyes Valdivia, a commuter who stopped to help, that she and her son were traveling in the carpool lane, and when she tried to switch lanes to exit, a white sedan with a man and woman inside cut her off. She gestured to them and proceeded into the exit lane, and that’s when the shooting occurred, Valdivia said.

Authorities said the man was in the front passenger seat when he fired the shot that punctured the Cruze’s trunk and struck Aiden.

The suspects in the shooting, who authorities said were a man and woman, sped away while Aiden’s mother pulled her Chevrolet Cruze onto the shoulder of the road.

CHP officials said the SportWagen continued northbound on the 55 and then moved onto the 91 headed east, toward Riverside.

CHP Officer John DeMatteo said he suspected that the image released to the public was taken by a camera located near the 91 Freeway. He did not say how the agency obtained the photo.

“The image itself, as one could probably deduce, was taken by a camera located near the freeway,” DeMatteo said.

Community support flooded Aiden’s family in the past week. A GoFundMe for his mother surpassed $300,000 on Friday.

Yorba Linda shop Station Donuts is selling Aiden’s Donuts—a blue-colored glazed treat—this weekend and donating all of the proceeds to his family.

Chairman Rep. James Clyburn, D-S.C., speaks as Federal Reserve Board chairman Jerome Powell testifies on the Federal Reserve’s response to the coronavirus pandemic during a House Oversight and Reform Select Subcommittee on the Coronavirus hearing […]

Joe Biden pauses as he speaks during the AARP. (Justin Sullivan/Getty Images) OAN NewsroomUPDATED 1:37 PM PT – Saturday, June 26, 2021 Democrats appear to be backing off the call to defund the police as […]