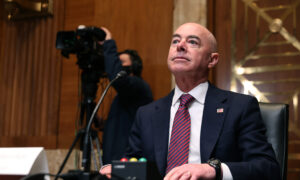 U.S. Customs and Border Protection on Friday banned a Chinese fishing company from selling seafood products in the United States over concerns that the firm was treating migrant workers like slaves.

The agency said it will immediately start seizing tuna, swordfish, and other seafood products from Dalian Ocean Fishing Co., Ltd., at all U.S. ports of entry, citing U.S. federal law, which prohibits shipments linked to slave or child labor. The ban also extends to products that contain seafood, such as canned tuna and pet food, according to a CBP official.

While the CBP had targeted individual vessels in the past, it was the first time it had taken the action against an entire fleet of fishing vessels—numbering 32 in total—the agency said in a news briefing.

“Companies that exploit their workers have no place doing business in the United States,” said Department of Homeland Security Secretary Alejandro Mayorkas in a statement. “Products made from forced labor not only exploit workers, but hurt American businesses and expose consumers to unethical purchases,” he said.

The measure, or “withhold release order,” is designed to “protect vulnerable workers while leveling the playing field for U.S. fisherman and seafood producers,” said Troy Miller, acting commissioner at the CBP. He likened what the Chinese fishing company was doing to “modern slavery.”

Workers on the Dalian Ocean Fishing fleets, many of whom were Indonesians, suffered from “physical violence, withholding of wages, and abusive working and living conditions,” the CBP found in an investigation. It noted that their conditions met all 11 indicators of forced labor by international standards.

The Dalian company imported $233,000 worth of seafood in the past fiscal year.

The State Department in its 2020 human rights report also documented three Indonesian fishermen pleading for help, who said they were trapped in a Chinese fishing vessel, mistreated, and coerced to work 20-hour days with no pay.

The United States has imposed a number of import bans over concerns of Chinese forced labor. Most of the measures had focused on China’s Xinjiang region, where more than 1 million Uyghurs and other Muslim minorities have been held in internment camps to undergo torture and other abuses.

Other persecuted faith groups, one of the largest being practitioners of Falun Gong, also suffer slave labor abuse in prison. The State Department report cited a woman forced to make artificial flowers, cosmetics, and apparel, which The Epoch Times reported on last August.

The Trump administration, during its last week in office, ordered a sweeping ban on all cotton and tomato products from Xinjiang, a major world cotton producer, amid reports that hundreds of thousands of Uyghurs were forced to pick cotton in the region. The broad ban could have a major impact on the global apparel industry.

Child Reporter Who Interviewed Obama at White House Dies at 23

WEST PALM BEACH, Fla.—The student reporter who gained national acclaim when he interviewed President Barack Obama at the White House in 2009 has died of natural causes, his family says. Damon Weaver was 23 when […]

Bank of Canada Warns of Rising Risks From Household Debt, and a Hot Housing Market

OTTAWA—The Bank of Canada says its concerns are mounting that households are piling on too much debt and posing what the central bank says is a key vulnerability to the economy. In its latest financial […]