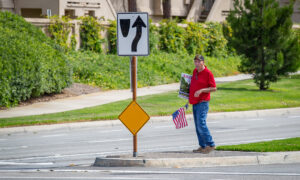 One group of protesters during a May 25 rally said they’d like the cemetery to be placed at the former El Toro Marine Base, while another group called for it to be placed elsewhere, away from homes and elementary schools.

Despite the two different groups being on opposite sides of the issue, they said they wanted to come together to mutually protest city council being silent on the issue.

The veterans group that wants the cemetery placed at the El Toro Marine Base, also known as the ARDA site, said it would make an ideal location because troops were once deployed from the site. Additionally, the site still has its control tower and aircraft hangers, which could be repurposed as lasting tributes to the thousands of men and women who served at the base, supporters said

The ARDA site has been under consideration since at least 2014, and in 2018 Irvine residents voted to support having the cemetery built there. Yet according to the ARDA group, this was ignored by city council. Then, the ARDA group gathered more than 19,000 signatures for a ballot initiative to designate the ARDA site as the only legally-available site in Irvine, which was adopted by the council May 12, 2020.

“We are helping military people who came here, were trained here, and they flew out of here to so many different wars,” Pat Kennedy, a proponent of the ARDA, site told The Epoch Times. “They want to come home, this is where they want to be.”

She continued, “They have the original towers there, and there’s some hangers that they can use for a museum, which again, kids would love that, who could come from the local schools for field trips. The plan is to have memorial plaques, explaining all the various wars that we were involved in that our men and women went and fought.”

The ARDA site would also feature the world’s largest U.S. flag with raised walkways, an assembly area for ceremonies, a botanical garden, a museum complex, memorial gardens, and a “promenade of heroes” walkway.

Former Irvine mayor Christina Shea, who attended the protest and who had previously as mayor voted against having the cemetery at the ARDA site, said putting the site there is far more expensive than other sites. She said she supports putting the site at the Great Park where a golf course is currently set to be built.

“Instead of having a golf course, let’s put the cemetery there,” Shea told The Epoch Times. “It’s away from residents, because [residents] don’t want it so close, is half the cost to build, and it’s clean land. I put that forward and then [the ARDA group] came and they have been fighting and fighting it because they will not get away from the ARDA site.”

Shea said the cost to develop the ARDA site is about $101 million and the golf course site would cost between $50 million to $55 million.  She also said the 80 old buildings on the property would be difficult to clean.

“Anybody that goes out there and looks at both sides [would know the golf course site] is the cleanest, the fastest to be developed, and the most cost effective,” Shea said.

CalVet, a state organization that seeks to help California veterans, is reviewing both sites and will release a report on the matter on March 31, though proponents of the ARDA site said the outcome of the review will not matter because the city council already approved the initiative to designate the ARDA site for the cemetery.