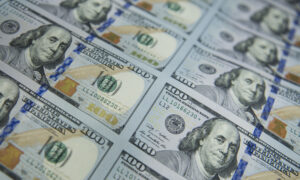 One of the arguments most used by central banks regarding the increase in inflation is that it’s because of bottlenecks and that the recovery in demand has created tensions in the supply chain. However, the evidence shows us that most commodities have risen in tandem in an environment of a wide level of spare capacity and even overcapacity.

Inflation is not a transport chain problem either. The excess capacity in the shipping and transport sector is more than documented, and in 2020 new capacity was added in both freight and air transport. Ships delivered in 2020 were expected to add 1.2 million 20-foot equivalent units (TEUs) of capacity, with 569,000 TEUs of capacity on ultra-large container vessels, according to Drewry, a shipping consulting firm. International Air Transport Association chief economist Brian Pearce also warned that the problem of capacity was likely to increase in 2020.

One of the important side effects of the chain of monetary stimuli, low interest rates, and fiscal stimulus programs is the increase in the number of zombie companies. The Bank for International Settlements (BIS) has shown this phenomenon in several empirical studies. Ryan Banerjee, senior economist at the BIS, identified the constant policy of lowering rates as a key factor in understanding the exponential increase in zombie companies, those that can’t cover their debt interest bills with operating profits.

The constant refinancing of debt from zombie companies also leads to the perpetuation of overcapacity, because a key process for economic progress, such as creative destruction, is eliminated or limited. Low interest rates and high liquidity have perpetuated or increased global installed excess capacity in aluminum, iron ore, oil, natural gas, soybeans, and many other commodities.

Why does inflation rise if overcapacity is perpetuated and there’s enough transport capacity?

We’ve forgotten the most important factor, the monetary one—or at least some central banks want to make us forget it. “Inflation is always and everywhere a monetary phenomenon,” explained Milton Friedman many decades ago. More supply of money is directed toward scarce assets, be it real estate or raw materials, and the purchasing power of money goes down.

Why did they tell us that there was “no inflation” before COVID-19 if money supply also increased massively?

The big difference between 2020 and the past years is that, previously, the Federal Reserve or the European Central Bank increased money supply at or below the levels of demand for money (measured as demand for credit and use of currency).

For example, the increase in the money supply of the United States was close to 6 percent with a global demand for dollars that grew between 7 and 9 percent. In fact, the world maintains a dollar shortage of about $17 trillion, according to Luke Gromen of Forest for the Trees. This keeps the dollar or euro relatively stable and a perception that inflation is low. However, there were red flags before COVID-19. There were protests all over the world, including Europe, against the rising cost of living. The world’s reserve currencies export inflation to other countries.

For the first time in decades, the Federal Reserve and the main central banks increased money supply well above demand. The response to the forced shutdown of activity with massive money printing generated an unprecedented inflationary wave. The economy didn’t collapse due to lack of liquidity or a credit crunch, but due to the lockdowns.

The 2020 monetary tsunami launched a global boomerang effect with three consequences: Emerging market currencies plummeted against the dollar because their central banks “copied” the U.S. policy without the global demand that the U.S. dollar enjoys. The second effect was a disproportionate amount of money flowing to risky assets joined by more flows to take overweight positions in scarce assets. That excess money made investors move from being underweight in commodities to overweight, generating a synchronized and abrupt rally. The third key factor is that extraordinary measures typical of a financial or demand crisis were taken to mitigate a supply shock, generating an unprecedented rise in money with no added credit demand. More money in scarce assets is not a price increase but a decrease in the purchasing power of money.

What Is the Risk?

The history of money since the Roman Empire always tells us the same thing. First, money is aggressively printed with the excuse that “there is no inflation.” When inflation rises, central banks and governments tell us that it’s “transitory” or due to “multi-casual” effects. And when it shoots up, governments present themselves as the “solution,” imposing price controls and restrictive measures on exports. It’s not a theory. All of us who have lived in the seventies know it.

That’s why it’s dangerous to pursue conglomerate stocks as an inflationary bet. Because when price controls and government intervention increases, margins collapse.

The risk of stagflation is not small, and the so-called value stocks are not a good bet in this environment. In stagflation, commodities with tight supply dynamics, gold and silver, high margin sectors, and bonds of stable currencies support a portfolio. However, most sectors underperform as we saw in the ’70s, where the S&P 500 generated very weak returns, significantly below inflation.

What can be different from other episodes?

Only a drastic reaction from central banks can change it. However, the question is, will central banks tighten policy when government deficits are soaring and even a small increase in sovereign yields can generate a debt crisis?

Will they react to what is clearly—as always—a monetary inflationary process?

In this July 2, 2020 file photo, Audrey Strauss, Acting United States Attorney for the Southern District of New York, points to a photo of Jeffrey Epstein and his ex-girlfriend Ghislaine Maxwell. (AP Photo/John Minchillo, […]

The website of the social media platform Parler is displayed in Berlin, Jan. 10, 2021. The platform’s logo is on a screen in the background. The conservative-friendly social network Parler was booted off the internet […]