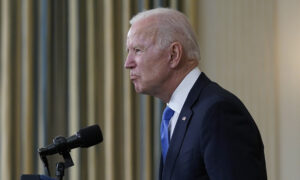 Richmond’s comments come as Biden and his administration are endeavoring to convince Republicans to accept their scope of what an infrastructure package should entail while proposing a $1.7 trillion measure scaled down from the original $2.3 trillion proposal in an effort to counter the Republican offer of a $568 billion package.

Republicans are calling for infrastructure spending but have repeatedly voiced concerns that Biden’s package contains provisions that are extraneous and have little to do with infrastructure. They are also apprehensive about rolling back Trump-era tax cuts, a key feature of Biden’s plan. To pay for the $2.3 trillion infrastructure plan, the White House is proposing to raise the corporate tax rate to 28 percent from the current 21 percent.

Richmond suggested that Biden may withdraw his commitment to a bipartisan measure if the parties’ disagreement leads to inevitable stalling.

“He wants a deal. He wants it soon, but if there’s meaningful negotiations taking place in a bipartisan manner, he’s willing to let that play out. But again, he will not let inaction be the answer. And when he gets to the point where it looks like that is inevitable, you’ll see him change course,” Richmond said during an interview with CNN’s “State of the Union.”

But Richmond added that, for now, the administration is seeking to take a bipartisan route.

To achieve a slightly smaller $1.7 trillion proposal, the White House offered to reduce spending on broadband to match the $65 billion that Republicans are proposing. Funding for research, development, supply chains, and other provisions have also been shifted to other legislation.

“This proposal exhibits a willingness to come down in size … while also staying firm in areas that are most vital to rebuilding our infrastructure and industries of the future, making our workforce and our country more competitive with China,” Psaki said Friday.

“The counteroffer also reflects our view that the Republican offer excludes entirely some proposals that are key to our competitiveness, key to investments in clean energy and in industries of the future, and rebuilding our workforce, including critical investments in our power sector, building and construction, workforce training, veterans hospital construction, and the care economy,” she said of the GOP’s plan.

The counteroffer has not garnered the support of Sen. Shelley Moore Capito (W.Va.), the lead Republican negotiator of the infrastructure bill, and other Republicans.

“There continue to be vast differences between the White House and Senate Republicans when it comes to the definition of infrastructure, the magnitude of proposed spending, and how to pay for it,” Kelley Moore, a spokeswoman for Capito, said in a statement to media outlets on Friday.

“Based on today’s meeting, the groups seem further apart after two meetings with White House staff than they were after one meeting with President Biden.”

Meanwhile, top Republicans have previously indicated that negotiations would be futile if Biden continues to push for the reversal of key portions of the 2017 tax bill, which had been signed by then-President Donald Trump.

“We’re not interested in reopening the 2017 tax bill. We both made that clear to the president. That’s our red line,” Senate Minority Leader Mitch McConnell (R-Ky.) told reporters in Washington after a meeting with Biden on May 12.

The economy was strong in early 2020, before being derailed by the COVID-19 pandemic, because of the Trump administration’s tax cuts, McConnell argued.

“Raising taxes would be the biggest mistake you could make,” added House Minority Leader Kevin McCarthy (R-Calif.), citing the rise in gas, food, housing, and lumber prices, and surging inflation for what he as called “a wish-list of progressive policies.”

The infrastructure package is not the only spending measure Biden is attempting to push through Congress. His administration has released a separate $1.8 trillion “American Families Plan,” which includes more spending on social welfare programs and would place higher taxes on wealthy individuals.

Seen through a translucent “On Air” sign, Joe Biden speaks during the virtual Munich Security Conference in the East Room of the White House in Washington, DC on February 19, 2021. (Photo by MANDEL NGAN/AFP […]

Rep. Stefanik fires back at Harvard after being removed from Institute of Politics for commenting on voter fraud