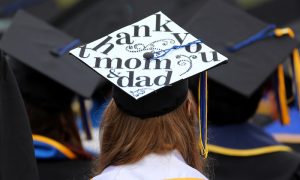 Conservative voices are overwhelmingly absent at commencement speeches this spring, as only one of the nation’s top 100 universities invited a right-leaning guest speaker to address the outgoing class of 2021, according to a recent report by the Young America’s Foundation (YAF).

“With 37 liberal speakers imparting progressive ideas and just one conservative addressing graduates, the bias in this year’s commencement season is undeniable,” YAF said in reporting the findings of its annual survey, which examines the ideological affiliation of commencement speakers at the top 100 national universities, as ranked by U.S. News & World Report.

Each speaker’s ideology, according to YAF, is determined by surveying public FEC records, searchable public statements and endorsements, and service in elected or appointed office.

Dr. Anthony Fauci, a leading member of the U.S. government’s pandemic response team, is among this year’s most popular speakers with a liberal listing. He delivered the keynote address virtually for the University of North Carolina, as well as several private institutions, including Emory University, Vanderbilt University, the Yale School of Public Health, and Rensselaer Polytechnic Institute.

Education Secretary Miguel Cardona, who recently came under fire due to proposed legislation to prioritize funding education programs that promote Critical Race Theory, was featured in a virtual commencement ceremony at the University of Connecticut. A Connecticut native, Cardona previously served as the state’s K-12 school chief before being tapped by President Joe Biden to join his cabinet.

Some other speakers on the political left include Oprah Winfrey, Brian Stevenson, and Kareem Abdul-Jabbar, who, as the YAF noted, all have a history in social justice activism.

The only speaker identified by the YAF as conservative is Thomas Jorden, a donor to the Republican Party and the chief executive of Cimarex Energy, a Denver, Colorado-based oil and natural gas company. Jorden spoke last week at three separate commencement events at Colorado School of Mines, where he graduated in 1980.

The YAF labeled the rest on the list as “N/A” or “unclear,” including Purdue University president Mitch Daniels, who spoke at his university’s commencement ceremony. Although a known Republican, Daniels was marked as “university leadership, N/A.”

“As made obvious in this year’s survey, universities continue to push far-left narratives from the first day of classes all the way until students walk across stage for their diploma,” YAF spokeswoman Kara Zupkus said.

Yellowstone National Park in the Time of COVID

With pandemic-related international travel restrictions in place, more people are finding domestic destinations as exciting and fascinating as lands far away. One of these destinations is Yellowstone National Park, always a draw for outdoor enthusiasts. […]

US Lawmakers Back $100 Billion Science Push to Compete With China

A bipartisan group of U.S. lawmakers on April 21 introduced legislation calling for $100 billion in government spending over five years on basic and advanced technology research and science in the face of rising competitive […]