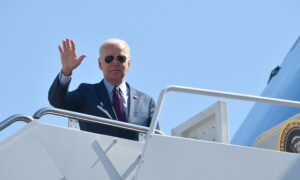 President Joe Biden is set to meet with South Korea’s president on Friday. What would be a big win for the talks? And where does China fit in all of it? Secretary of State Antony Blinken met with his Russian counterpart, in the first high-level dialogue between the two countries since Biden took office. This, as tensions run high between the two former Cold War adversaries. The House approves the commission to investigate the Capitol breach on Jan. 6. That’s while former President Donald Trump and other top Republicans oppose it. But what does new video footage of the suspects involved in the breach show?

American Federation of Teachers (AFT) president Randi Weingarten on Thursday defended The New York Times’ controversial “1619 Project” and critical race theory, saying their opponents have no idea what they are actually about. During an […]

OAN NewsroomUPDATED 6:27 AM PT – Tuesday, January 4, 2022 COVID lockdowns and mask mandates are having a detrimental effect on children. One America’s Stella Escobedo spoke with Dr. Brian Stenzler about the dangers kids […]