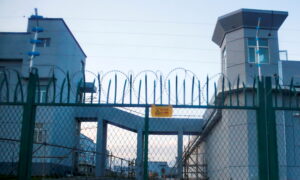 VILNIUS—The parliament in Lithuania on Thursday became the latest to describe China’s treatment of its Uyghur minority as “genocide”, voting to call for a U.N. investigation of internment camps and to ask the European Commission to review relations with Beijing.

The Biden administration in the United States has used the term genocide to describe the Chinese communist regime’s actions towards the Uyghurs, as have parliaments in countries including Britain and Canada. Beijing denies abusing minorities and has condemned countries for using the term.

The non-binding resolution, supported by three fifths of Lithuanian parliament members, also called on the Chinese regime to abolish a national security law in Hong Kong, and to let observers into Tibet and begin talks with its spiritual leader, the Dalai Lama.

Neither Prime Minister Ingrida Simonyte nor Foreign Minsiter Gabrielius Landsbergis participated in the vote, despite being present in the parliament.

“We support democracy, as we will never forget the cruel lesson of living under occupation by a Communist regime for 50 years”, said Dovile Sakaliene, a lawmaker who has been blacklisted by the Chinese regime and who sponsored the resolution.

Lithuania, which suffered repressions under Soviet rule from 1940-1991, is now a member of the EU and NATO, and has often taken a prominent role in pushing for tougher Western diplomatic lines towards Russia and Communist countries such as China.

In March Lithuania said it would open a trade representative office this year in Taiwan, which China considers its own territory, angering Beijing. Taiwan is a de facto independent country with its own democratically elected government, military, constitution, and currency.

Rights groups, researchers, former residents and some Western lawmakers say authorities in China’s Xinjiang province have arbitrarily detained around a million Uyghurs and members of other primarily Muslim minorities in a network of camps since 2016.

Beijing initially denied the camps existed but has since said they are vocational training centers designed to combat religious extremism.

A Ukrainian serviceman keeps watch at a position on the frontline with Russia-backed separatists near the village of Pesky, Donetsk region, on December 14, 2021. (Photo by ANATOLII STEPANOV/AFP via Getty Images) OAN NewsroomUPDATED 12:48 […]