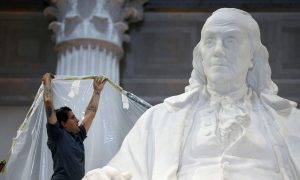 The Enlightenment saw the emergence of the “philosophes” in Europe—intellectuals who were unafraid to publicly challenge … well, just about everything.

But Britain’s American colonies weren’t without their own philosophers. The most famous was certainly Benjamin Franklin, the grandson of an indentured servant and the son of a candlemaker. Unlike many of Europe’s thinkers, however, Franklin preached a philosophy of practicality.

Brought up without much formal schooling, Franklin mastered the printing trade while working as a teenager in his older brother’s print shop, where the young man also had access to the latest intellectual developments of the Western world. Teenaged Franklin would read articles from Europe’s premier journals over and over, delighting not just in new knowledge but also in the writing itself and often “wish[ing] if possible to imitate it.”

At 17, Franklin found print work in Philadelphia, then in London. But at 20, he was back in Philadelphia, now working as a clerk. Having spent time in the coffeehouses of Europe—major Enlightenment-era gathering places for philosophical debate—Franklin clearly longed for the sort of discussions he’d participated in there. To remedy this, within a year he had “form’d most of my ingenious Acquaintances into a Club for mutual Improvement, which we call’d the Junto.”

In 1731, the group spearheaded the establishment of the Library Company of Philadelphia, an association of subscribers who pooled their money on an annual basis to purchase books from overseas to stock a physical library. Franklin donated some of his own books to the library—including a collection of essays by John Locke.

When the library was open (four hours every Saturday evening), members could freely browse and borrow books. The library was also home to curios from around the world—fossils, rocks, coins, scientific instruments. Its existence inspired imitators; by the 1740s, libraries were popping up in other American cities.

Meanwhile, the American publisher had been experimenting on electricity, reporting his findings in a series of letters to the president of the Royal Society in London. Franklin’s theory—formulated in part after rubbing amber, sulfur, glass, and other materials with cloth or fur—was that electric charges were of two types: positive and negative. Positive he marked with a “+” and negative with a “−” because, he reasoned, the positive represented an excess of “electric fluid,” and the negative a deficiency. (Only in recent times was it discovered that a “negative” charge actually indicates an excess of electrons, not a deficiency in “electric fluid,” but by then, the positive and negative labels had stuck.)

The famous image of Ben Franklin flying a kite in a thunderstorm is based on one of his experiments attempting to prove that lightning was itself a discharge of electricity; though the string of the kite produced sparks (thereby making atmospheric electricity observable), no lightning struck—which might have saved Franklin’s life!

Based on this understanding of the nature of lightning, Franklin proposed that a rod—tall and grounded—be employed as protection for buildings against lightning. Soon, lightning rods adorned countless buildings throughout the colonies. In 1751, the Royal Society published Franklin’s letters. He was lauded as a leading scientist and, two years later, was honored with the Society’s most prestigious award: the Copley Medal.

But Franklin did more than work with electricity.

Franklin invented a stove. The so-called “Franklin Stove” (later made famous thanks to a few key improvements by another inventor) produced less smoke than a typical stove—while producing more heat.

He probably invented bifocal glasses (he dubbed them “double spectacles”).

One of his essays on the “Northern Lights” (Aurora borealis), written in both English and French and read at the French Academy of Sciences, hypothesized that the snow and other moisture of the Arctic had an overcharging effect on the electricity in the air—and that the lights were therefore simply a concentration of electrical charges.

Building on the work of another inventor, Franklin created the armonica, a musical instrument made of glass cups arranged by size along a spindle that turned by means of a foot pedal. “Of all my inventions, the glass armonica has given me the greatest personal satisfaction,” he wrote. Even Beethoven and Mozart composed music for the instrument.

Franklin published research on the Gulf Stream in order to explain why it took longer to travel from England to America than from America to England.

And, ever the pragmatist, Franklin spent quite a bit of time attempting to conquer the common cold—concluding that, contrary to the prevailing wisdom, it was not spread by “the cold” but by close proximity to other people.

All the while, Benjamin Franklin maintained a correspondence with many of the age’s great pioneers of science. His clout as a respected American “natural philosopher” and Enlightenment sage would come in very handy during the American Revolution.

Such was Franklin’s esteem that, upon his death, French thinker and economist Turgot eulogized, “He seized the lightning from the sky and the scepter from the hand of tyrants.”

Dr. Jackson, who teaches Western, Islamic, American, Asian, and world histories at the university level, is also known on YouTube as “The Nomadic Professor.” You can follow his work, including entire online history courses featuring his signature on-location videos filmed the world over, at nomadicprofessor.com.

‘Encourages’, ‘Most overcome’, ‘Celebrity’, ‘Easter’s beginning’, ‘Reservations’, ‘Blue dye’, ‘Elated’, ‘Saturn satellite’, ‘Indian Almond tree’, ‘Little scurrier’, ‘Keeler and Dee’, and ‘Salinger heroine’ are some of the clues in this crossword puzzle from the May 12, […]